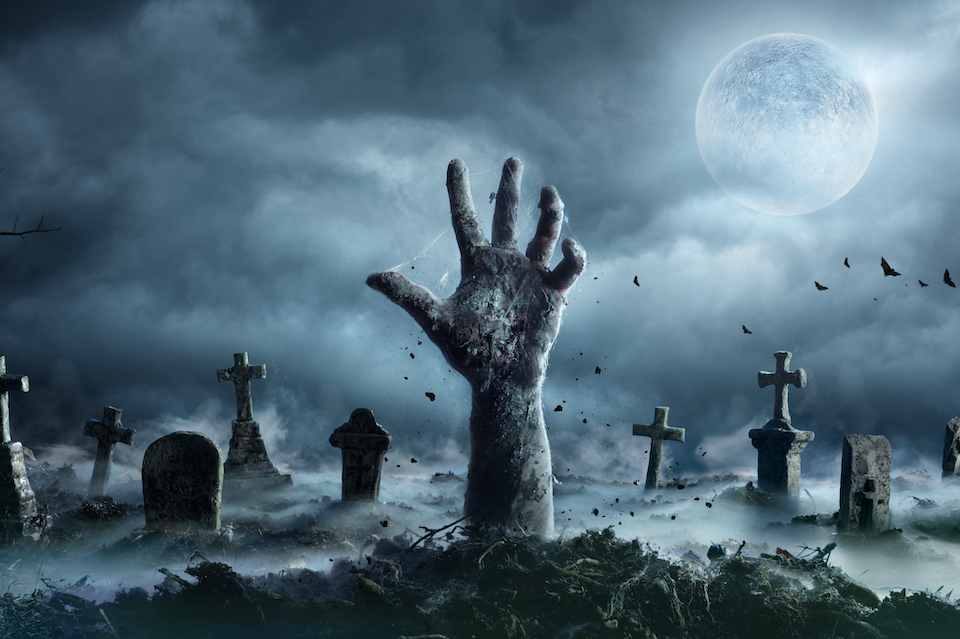 The crypto market has lost over $2.1 trillion from its peak of over $3 trillion when Bitcoin hit an all-time high of $69,000 in November 2021. There is also no sign recovery is in sight anytime soon as weary investors pulled back amid recession fears and a slowdown in the global economy.

However, Bitcoin, the world’s most popular, seems to be faring better than most of the other cryptocurrencies known as altcoins. According to a recent report by CoinKickoff, a resource site for learning about cryptocurrencies and web3, 91% of all the coins that were present for the 2014 cryptocurrency market crash are now entirely abandoned.

In a report titled, “A Visual Analysis Of 10 Years Of Dead Crypto Coins,” CoinKickoff reviewed data on over 2,400 dead coins from Coinopsy, and then compiled data on the current status of each coin. CoinKickoff then “analyzed the performance of each coin over the last 10 years, noting when coins were killed off and why.”

Below Are The Key Findings

The CoinKickoff team found that a large portion of coins that are now dead was created in 2017, with 704 now-dead coins being created that year. The report also showed that the number of altcoins that met their untimely death reached peaked in 2018. The worst of the single most deadly year in cryptocurrency was 2018, during which 751 coins became defunct.

“When looking back on the history of cryptocurrency, 2013 will be seen as its first major boom. In a year dominated by emerging technology from drones to smartwatches, the price of Bitcoin surged from $150 to $1,000, peaking out at $1,127 in November 2013. Before the surge, just 14 coins were on the market — with only Bitcoin and Litecoin remaining in the top 10 as of 2022.”

Crypto tracking site CoinGecko noted that the sudden decline in the crypto market has caused the prices of 72 of the top 100 tokens to drop by more than 90 percent from their all-time highs (ATH).

CoinKickoff also noted that the surge in the price of Bitcoin led to a wave of rival currencies vying for relevance. Their data further shows that 84 coins entered the crypto market in 2013, while 607 joined in 2014 — “all aiming to cash in on the Bitcoin crash in early 2014 amid a scandal involving its links to the online drugs marketplace Silk Road.” 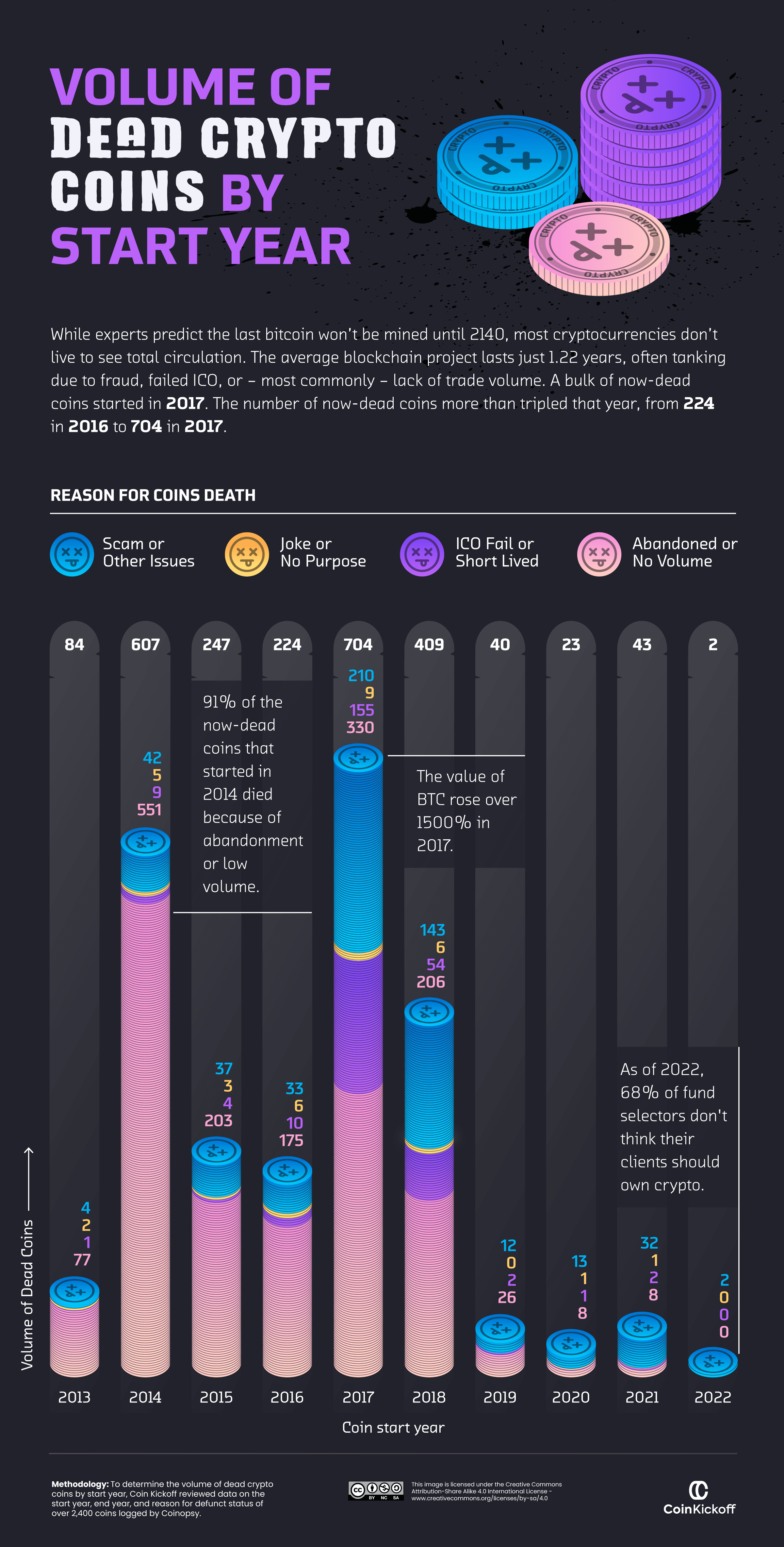 What Goes Up Must Come Down

The CoinKickoff team found that the second surge in cryptocurrency led to 750 new dead coins. “2017 will go down as the ‘summer of love’ for crypto historians,” the report added.

“For the first time, emerging blockchain technologies attracted the attention of business leaders worldwide, leading to a surging investment. In July 2017, Goldman Sachs’ chief technician Sheba Jafari predicted that crypto would reach $3,600 by the end of the year.”

The year 2017 saw a number of lucrative ICOs — most notably Filecoin, which amassed $257 million. However, all was not as it seemed. 704 now-dead coins entered the market that year, the most of any year in the last decade.

While crypto has shown it can disrupt traditional finance with crypto trading and investment, the report also found that the sector has been prone to high-profile failures.

CoinKickoff also alluded to another from the China Academy of Information and Communications Technology (CAICT), which found that 92% of blockchain projects ever launched are still active today, with a lifespan of just 1.22 years. 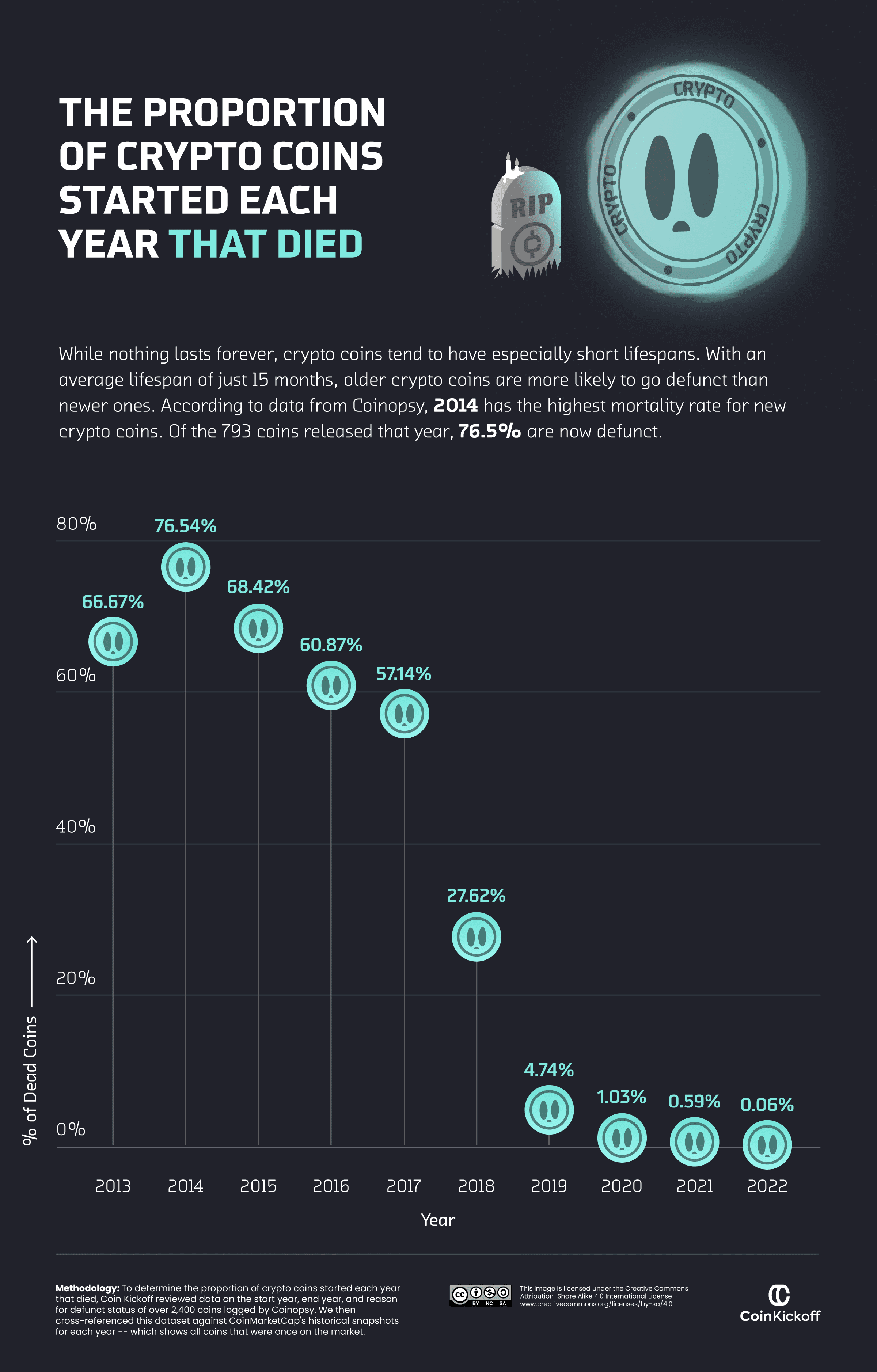 Only 16 Crypto Coins Have Been Abandoned Since 2020

It appears the number of deaths has slowed down over the year. Citing data from blockchain research platform LongHash, the report also found that 63.1% of dead crypto coin projects were dropped by investors, sending their prices plummeting.

“In a saturated market with over 12,000 currencies, it is natural that well-intentioned projects fail to attract interest. Coinopsy suggests a number of reasons why a coin may become abandoned, from outdated blockchain to the developer’s personal circumstances.” 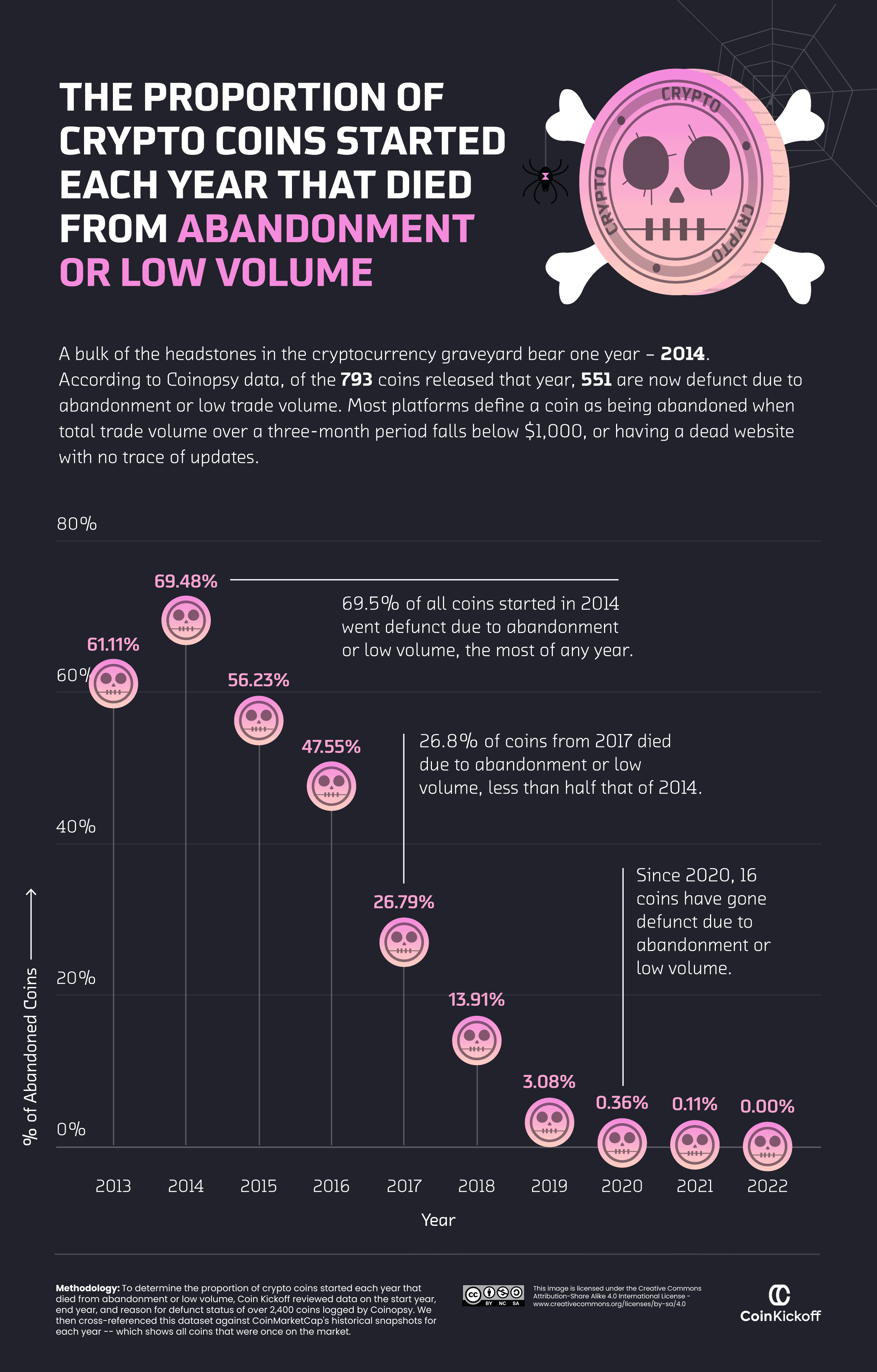 The lack of government regulation in the crypto market continues to make the industry a prime target for fraudulent schemes and opportunistic scammers. Not only can the coins themselves be established as scams, but criminals also use established currencies like Bitcoin and Ethereum to dupe investors.

The Federal Trade Commission reports that since the start of 2021, more than 46,000 people have become victims of crypto scams, losing over $1 billion in total. According to Chainanalysis, “renewed interest in the market following 2021’s latest price surges has led to a wave of crypto crime — to the tune of $14 billion.” 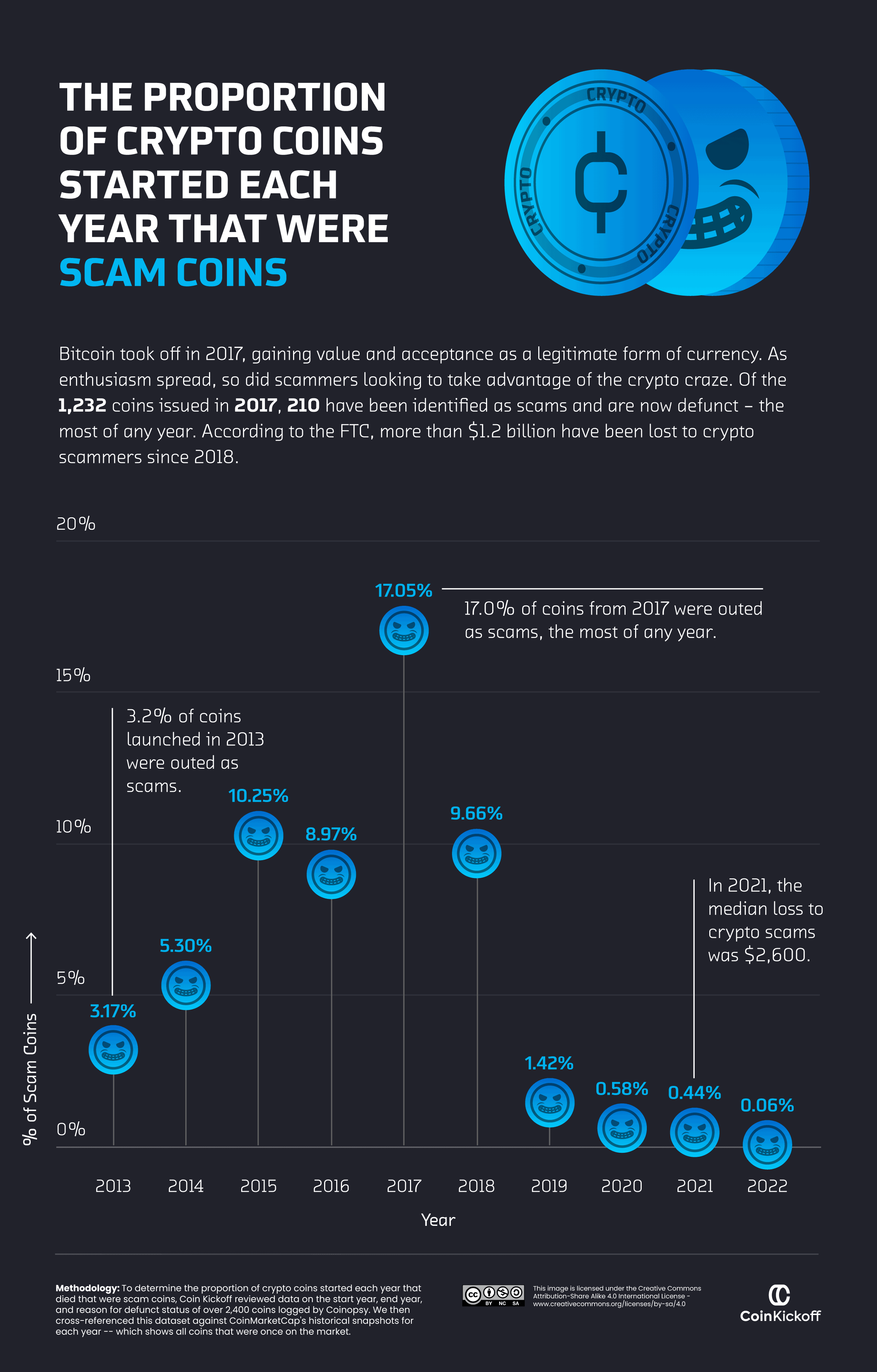 Reasons for The Death of  Altcoins

All coins died for a number of reasons including loss of traction and delisting from crypto exchanges. However, Coinopsy suggests abandonment as the number one reason.

“Abandoned Dead Coins are one of the most common dead coins or the most common, this is for a number of reasons. If a coin or token has little information on why it died it falls into the default abandoned classification,” Coinopsy noted.

According to Coinopsy, the top reasons include Loss of traction, removal from exchanges, not listed on exchanges, stagnation/giving up
no nodes, health/family issues, unknown project history, and limited funding/small team.

You can read the rest of the report here. 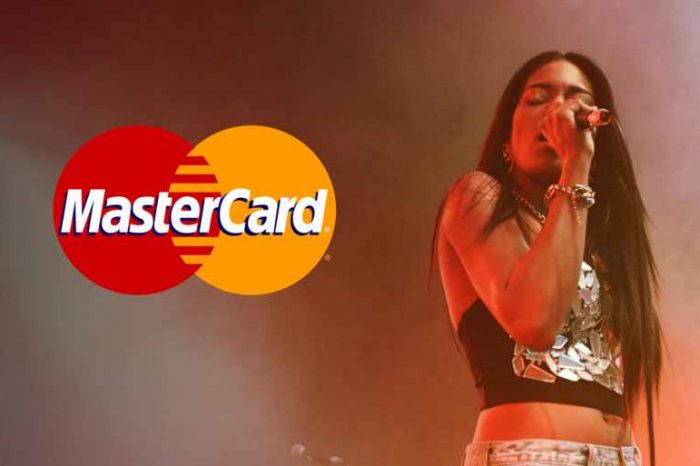 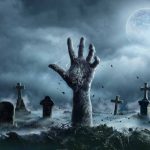