It’s been a while since we covered some of the stories from the former National Security Agency (NSA) whistleblower Edward Snowden. Back in 2018, Snowden criticized Facebook in a tweet after the social media giant suspended Cambridge Analytica in response to a private information theft has been reported that may have reached 50 million Facebook profiles.

“Facebook makes their money by exploiting and selling intimate details about the private lives of millions, far beyond the scant details you voluntarily post. They are not victims. They are accomplices,” Edward Snowden said.

Now, Snowden is sounding a new alarm bell that is going to terrify every American. So, what’s Snowden talking about? It is about the military-grade Pegasus spyware developed by an Israeli cybersecurity startup NSO Group, which we covered back in 2018. The spyware is used by the government to hack the cellphones of journalists, activists worldwide. The NSO Group’s Pegasus spyware is licensed to governments around the globe and can infect phones without a click.

According to a detailed report from the UK Guardian, the leak Snowden is talking about uncovers global abuse of cyber-surveillance weapon spyware sold to authoritarian regimes used to target activists, politicians, and journalists. In a tweet early this morning, Snowden said:

“Stop what you’re doing and read this. This leak is going to be the story of the year.”

Stop what you're doing and read this. This leak is going to be the story of the year: (LINK: https://t.co/zhC0LN4TlC) pic.twitter.com/doo4HDDzxt

According to an investigation by The Washington Post and 16 media partners, the Pegasus spyware licensed by Israeli cybersecurity startup NSO Group to governments for tracking terrorists and criminals was used in attempted and successful hacks of 37 smartphones belonging to journalists, human rights activists, business executives, and two women close to murdered Saudi journalist Jamal Khashoggi.

“The numbers on the list are unattributed, but reporters were able to identify more than 1,000 people spanning more than 50 countries through research and interviews on four continents: several Arab royal family members, at least 65 business executives, 85 human rights activists, 189 journalists, and more than 600 politicians and government officials — including cabinet ministers, diplomats, and military and security officers, as well as several heads of state and prime ministers. The purpose of the list could not be conclusively determined,” The Post reported. 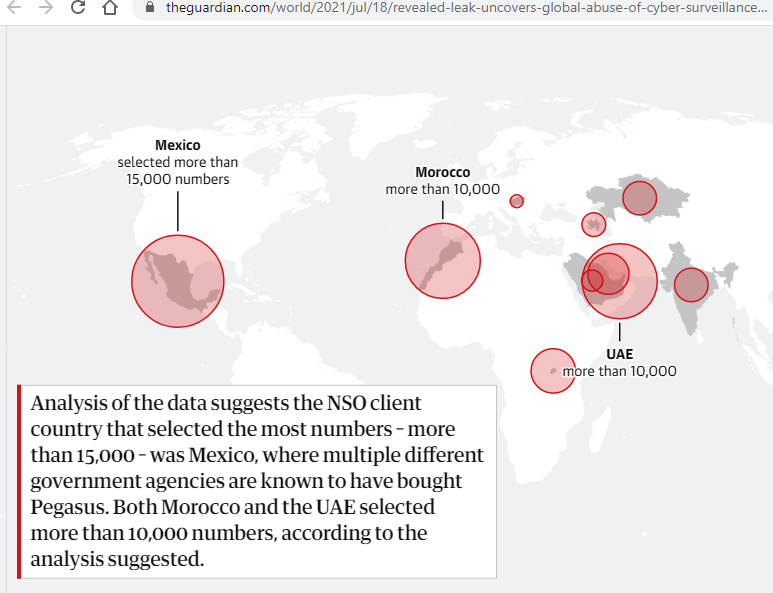 Other reports also revealed that the spyware has been used with WhatsApp to send malware to more than 1,400 phones by exploiting a zero-day vulnerability. According to the report, by simply placing a WhatsApp call to a target device, the malicious Pegasus code could be installed on the phone, even if the target never answer.

Edward Snowden is a former Central Intelligence Agency (CIA) employee and former contractor for the United States government who copied and leaked classified information from the National Security Agency (NSA) in 2013 without authorization.

His disclosures revealed numerous global surveillance programs, many run by the NSA and the Five Eyes Intelligence Alliance with the cooperation of telecommunication companies and European governments. He was later granted asylum in Russia and has been there ever since.