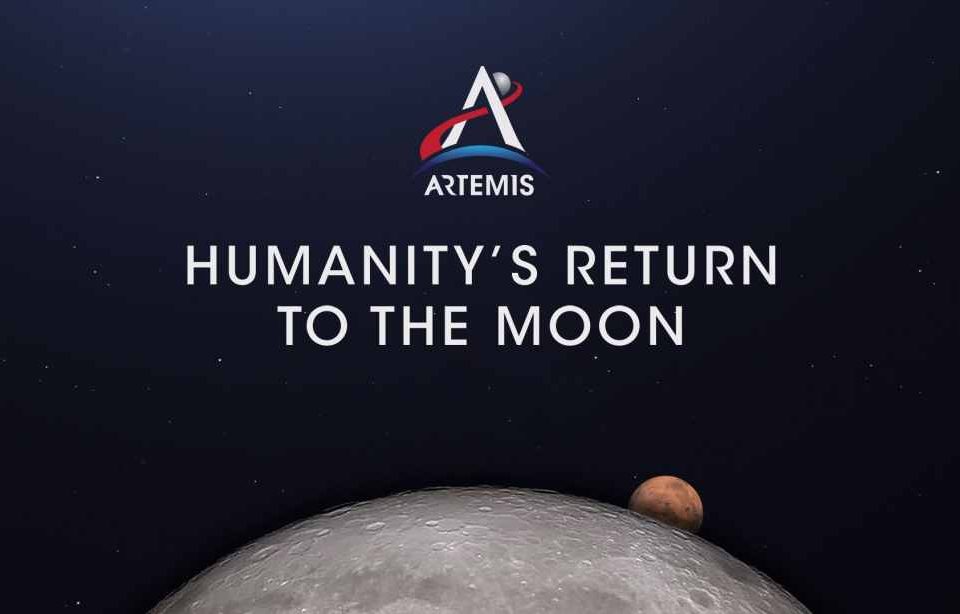 Late last year, the U.S. National Aeronautics and Space Administration (NASA) said it would be landing the first woman ever on the Moon within four years. At the time, the agency said it plans to return human back on the lunar surface for the first time since 1972, through its Artemis program.

Now NASA is following through on its pledge. In a press statement this week, NASA shared an update outlining its plan. The space agency unveils a massive $28 billion program to send the first woman to the Moon in 2024 for the return to the lunar surface. The Artemis program also includes the latest Phase 1 plan to land the first woman and the next man on the surface of the Moon in 2024.

According to NASA, the funds are going to be used for the development of machinery. $1 billion dollars of the budget will go directly to the development of a commercial human lunar system that will take humans to the moon’s surface. $651 million will be used to support the Orion Spacecraft and the rocket that Boeing is building for the moon mission—called the Space Launch System or SLS, on which NASA has already spent at least $11.9 billion.

According to NASA, the first mission, known as Artemis I, will begin late next year without astronauts, and Artemis II will fly with the crew in 2023. NASA plans on exploring and commercializing the solar system that starts with landing the first woman on the moon in 2024.

In a Twitter post, NASA Administrator Jim Bridenstine, said: “The #Artemis program is well underway! Learn more about @NASA ’s lunar exploration plans including how we will land the first woman and the next man on the Moon in 2024:”

The #Artemis program is well underway! Learn more about @NASA’s lunar exploration plans including how we will land the first woman and the next man on the Moon in 2024: https://t.co/mj1GwwV61S

NASA said the first woman astronaut for the 2024 mission will be chosen from 12 active woman astronauts. In a press statement, NASA Administrator Jim Bridenstine said:

“With bipartisan support from Congress, our 21st century push to the Moon is well within America’s reach. As we’ve solidified more of our exploration plans in recent months, we’ve continued to refine our budget and architecture. We’re going back to the Moon for scientific discovery, economic benefits, and inspiration for a new a generation of explorers. As we build up a sustainable presence, we’re also building momentum toward those first human steps on the Red Planet.”

NASA said its powerful new rocket, the Space Launch System (SLS), and the Orion spacecraft are closer than ever to their first integrated launch. The spacecraft is complete while the core stage and its attached four engines are undergoing a final series of tests that will culminate in a critical hot fire test this fall. 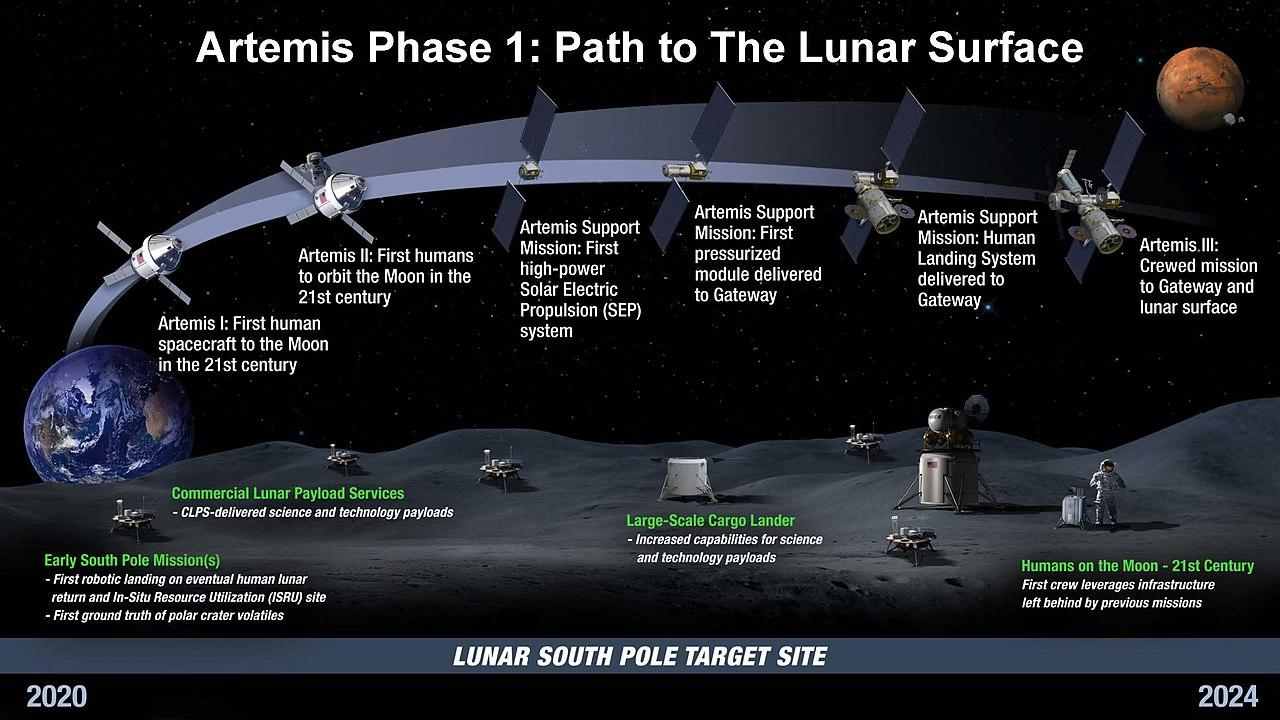 Following a successful hot-fire test, the core stage will be shipped to the agency’s Kennedy Space Center in Florida for integration with the spacecraft. NASA will launch an SLS and an Orion together on two flight tests around the Moon to check performance, life support, and communication capabilities. The first mission – known as Artemis I – is on track for 2021 without astronauts, and Artemis II will fly with the crew in 2023.

In the Phase 1 plan, NASA notes additional details about conducting a new test during the Artemis II mission – a proximity operations demonstration. Shortly after Orion separates from the interim cryogenic propulsion stage, astronauts will manually pilot Orion as they approach and back away from the stage. This demonstration will assess Orion’s handling qualities and related hardware and software to provide performance data and operational experience that cannot be readily gained on the ground in preparation for rendezvous, proximity operations, and docking, as well as undocking operations in lunar orbit beginning on Artemis III.

While preparing for and carrying out these flight test missions, NASA already will be back on the Moon robotically – using commercial delivery services to send dozens of new scientific investigations and technology demonstrations to the Moon twice per year beginning in 2021.

In 2024, Artemis III will be humanity’s return to the surface of the Moon – landing the first astronauts on the lunar South Pole. After launching on SLS, astronauts will travel about 240,000 miles to lunar orbit aboard Orion, at which point they will directly board one of the new commercial human landing systems, or dock to the Gateway to inspect it and gather supplies before boarding the landing system for their expedition to the surface.

Wearing modern spacesuits that allow for greater flexibility and movement than those of their Apollo predecessors, astronauts will collect samples and conduct a range of science experiments over the course of nearly seven days. Using the lander, they will return to lunar orbit before ultimately heading home to Earth aboard Orion.

Work is progressing rapidly on the Gateway. NASA will integrate the first two components to launch – the power and propulsion element and the habitation and logistics outpost – in 2023. This foundation for the Gateway will be able to operate autonomously, conducting remote science experiments when astronauts are not aboard. NASA has selected the first two science instrument suites to conduct space weather investigations in lunar orbit before crew visits.

While NASA has not made a final decision to use the Gateway for Artemis III, Artemis IV and beyond will send crew aboard Orion to dock to the Gateway, where two crew members can stay aboard the spaceship in orbit while two go to the surface. Over time, the outpost will evolve, with new modules added by international partners, allowing crew members to conduct increasingly longer lunar missions.

As detailed in the agency’s concept for surface sustainability earlier this year, an incremental buildup of infrastructure on the surface will follow later this decade, allowing for longer surface expeditions with more crew. That concept calls for an Artemis Base Camp that would include new rovers, power systems, habitats, and more on the surface for long-term exploration of the Moon.

Throughout the Artemis program, robots and humans will search for, and potentially extract, resources such as water that can be converted into other usable resources, including oxygen and fuel. By fine-tuning precision landing technologies as well as developing new mobility capabilities, astronauts will travel farther distances and explore new regions of the Moon. 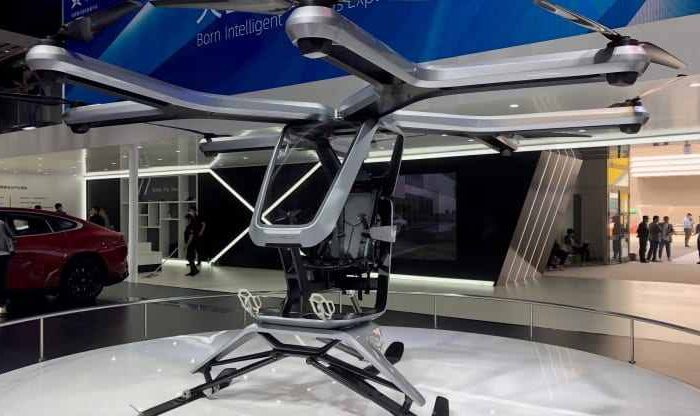 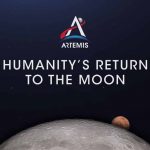