On Saturday, we wrote about Chinese virologist Dr. Li-Meng Yan after she appeared last week on British television where she claimed SARS-CoV-2, the virus which causes COVID-19, was created by Chinese scientists in a lab. Dr. Yan fled the country and left her job at a prestigious Hong Kong university.

For the first time, Dr. Yan, who is in hiding in an undisclosed location in the United States, posted evidence of her claims that the coronavirus was indeed developed in a Wuhan, China lab. Yesterday, Dr. Yan joined Twitter using the handle: @LiMengYAN119. Dr. Yan already has about 50,000 followers.

On Monday, Dr. Yan tweeted a link to a paper she co-authored with three other Chinese scientists. The paper published at Zenodo.or is titled: “Unusual Features of the SARS-CoV-2 Genome Suggesting Sophisticated Laboratory Modification Rather Than Natural Evolution and Delineation of Its Probable Synthetic Route.” Not surprisingly, the preprint website Zenodo was hacked immediately after the paper was published. The site is now back up and running.

Dr. Yan also posted a link to her credentials on ResearchGate, revealing her former affiliation with the University of Hong Kong and 13 publications that have been cited 557 times.

In the 26-page paper, Dr. Yan and three other Chinese scientists said:

“The evidence shows that SARS-CoV-2 should be a laboratory product created by using bat coronaviruses ZC45 and/or ZXC21 as a template and/or backbone. Building upon the evidence, we further postulate a synthetic route for SARS-CoV-2, demonstrating that the laboratory-creation of this coronavirus is convenient and can be accomplished in approximately six months. Our work emphasizes the need for an independent investigation into the relevant research laboratories. It also argues for a critical look into certain recently published data, which, albeit problematic, was used to support and claim a natural origin of SARS-CoV-2. From a public health perspective, these actions are necessary as knowledge of the origin of SARS-CoV-2 and of how the virus entered the human population are of pivotal importance in the fundamental control of the COVID-19 pandemic as well as in preventing similar, future pandemics.”

Here is the extended punchline:

The receptor-binding motif of SARS-CoV-2 Spike cannot be born from nature and should have been created through genetic engineering.

The Spike proteins decorate the exterior of the coronavirus particles. They play an important role in infection as they mediate the interaction with host cell receptors and thereby help determine the host range and tissue tropism of the virus. The Spike protein is split into two halves (Figure 3). The front or N-terminal half is named S1, which is fully responsible for binding the host receptor. In both SARS-CoV and SARS-CoV-2 infections, the host cell receptor is hACE2. Within S1, a segment of around 70 amino acids makes direct contacts with hACE2 and is correspondingly named the receptor-binding motif (RBM) (Figure 3C). In SARS-CoV and SARS-CoV-2, the RBM fully determines the interaction with hACE2. The C-terminal half of the Spike protein is named S2. The main function of S2 includes maintaining trimer formation and, upon successive protease cleavages at the S1/S2 junction and a downstream S2’ position, mediating membrane fusion to enable cellular entry of the virus. 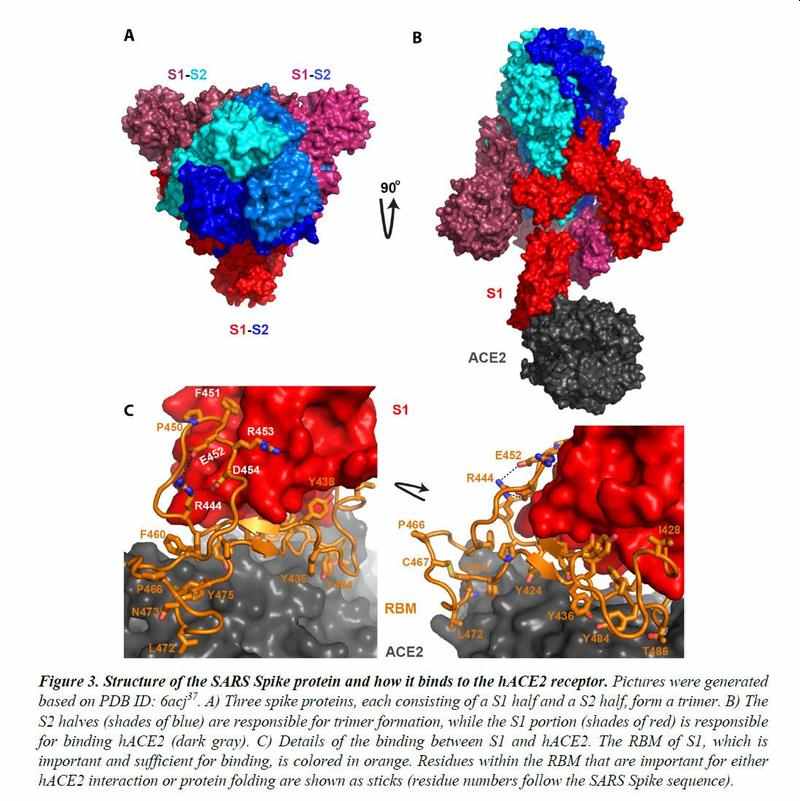 Has SARS-CoV-2 been subjected to in vitro manipulation?

We present three lines of evidence to support our contention  that laboratory manipulation is part of the history of SARS-CoV-2:
i. The genomic sequence of SARS-CoV-2 is suspiciously similar to that of a bat coronavirus discovered by military laboratories in the Third Military Medical University (Chongqing, China) and the Research Institute for Medicine of Nanjing Command (Nanjing, China).
ii. The receptor-binding motif (RBM) within the Spike protein of SARS-CoV-2, which determines the host specificity of the virus, resembles that of SARS-CoV from the 2003 epidemic in a suspicious manner. Genomic evidence suggests that the RBM has been genetically manipulated.
iii. SARS-CoV-2 contains a unique furin-cleavage site in its Spike protein, which is known to greatly enhance viral infectivity and cell tropism. Yet, this cleavage site is completely absent in this particular class of coronaviruses found in nature. In addition, rare codons associated with this additional sequence suggest the strong possibility that this furin-cleavage site is not the product of natural evolution and could have been inserted into the SARS-CoV-2 genome artificially by techniques other than simple serial passage or multi-strain recombination events inside co-infected tissue cultures or animals.

Genomic sequence analysis reveals that ZC45, or a closely related bat coronavirus, should be the backbone used for the creation of SARS-CoV-2.

The structure of the ~30,000 nucleotides-long SARS-CoV-2 genome is shown in Figure 1. Searching the NCBI sequence database reveals that, among all known coronaviruses, there were two related bat coronaviruses, ZC45 and ZXC21, that share the highest sequence identity with SARS-CoV-2 (each bat coronavirus is ~89% identical to SARS-CoV-2 on the nucleotide level). Similarity between the genome of SARS-CoV-2 and those of representative β coronaviruses is depicted in Figure 1. ZXC21, which is 97% identical to and shares a very similar profile with ZC45, is not shown. Note that the RaTG13 virus is excluded from this analysis given the strong evidence suggesting that its sequence may have been
fabricated and the virus does not exist in nature2,6-9. (A follow-up report, which summarizes the up-to-date evidence proving the spurious nature of RaTG13, will be submitted soon)

Below is another interview Dr. Yan had with America Voice on September 10.

"The #Covid_19 was lab-modified based on a virus discovered and owned by the Chinese military, the Zhoushan bat coronavirus, ZC45 and ZXC21