Last week, we told you about Tesla’s after the electric car company’s stock eclipsed $1,000 per share valuing the company at $188 billion as of market close today. Tesla is now worth more than GM, Ford, Ferrari, BMW, Nissan, Mazda, Aston Martin, and Fiat Chrysler, which have combined worth of $181 billion.

On Friday, Tesla reached a major milestone after it surpassed Toyota to become the world’s most valuable car company. Tesla has now been crowned the world’s most-valuable automaker – beating Toyota TM – as its stock has crossed the $1,000 a share mark. Tesla now sits on a market cap of $190.01 billion while Toyota’s market cap is now more than $182 billion. Tesla is now the most valuable US car maker of all time

In January, Tesla beat Wall Street expectations after crushing the fourth quarter Q4 2019 results with $7.38 billion in revenue. Tesla noted that 2019 was a huge turning point for the company. Thanks in part to consistent, strong demand for the Model 3, Tesla returned to GAAP profitability in the second half of the year, generating $1.1 billion of free cash flow for the year. The company also credits cost control across the board for its strong cash generation. 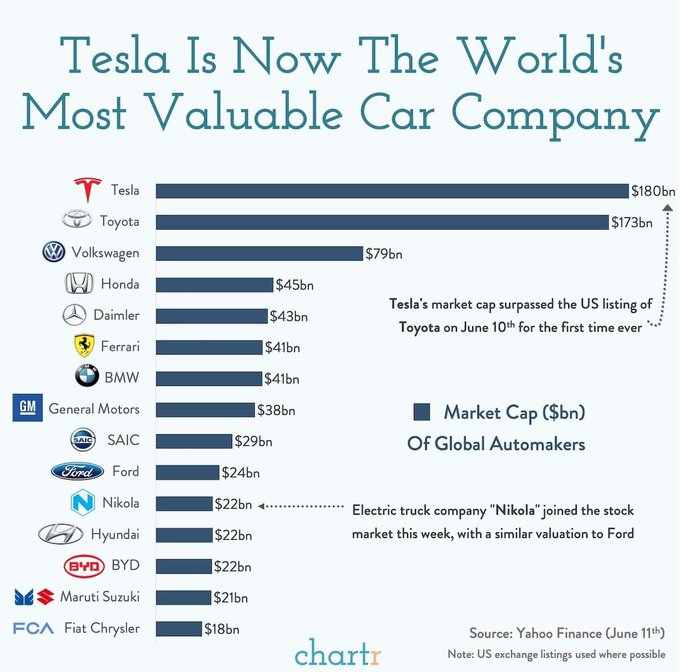