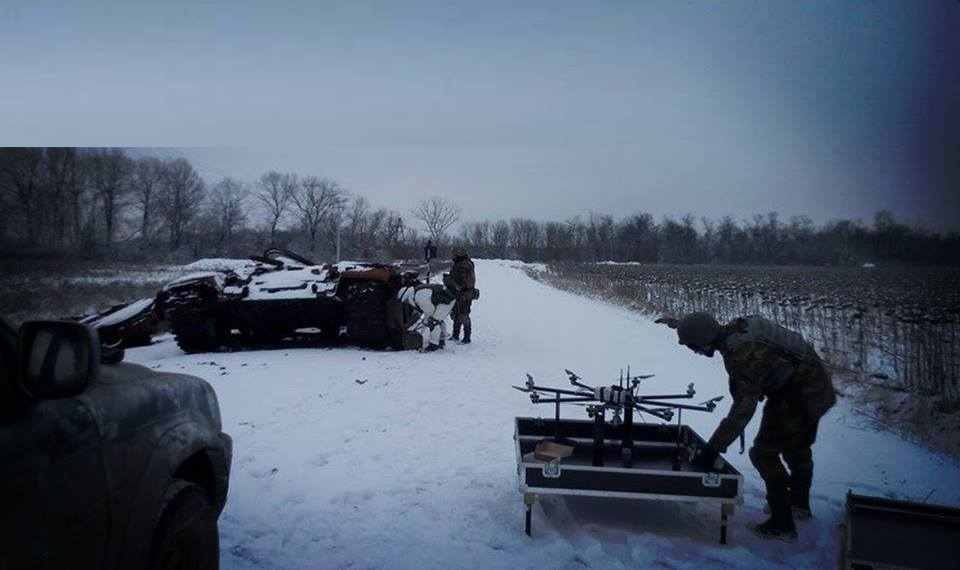 Two days after the war broke out between Russia and Ukraine, Ukrainian Minister of Digital Transformation Mykhailo Fedorov asked Elon Musk to get Starlink internet service to Ukraine. The request came as Ukraine continues to suffer through internet and power outages throughout the invasion. Ten hours later, Musk responded in a tweet saying that “Starlink service is now active in Ukraine. More terminals en route.”

But unknown to many, these Starlink satellites are not only providing much-needed internet access to the people of Ukraine, but they are also helping Ukrainian forces to dominate the skies. The use of DIY aerial reconnaissance drones demonstrates the power of using drones in 21st-century warfare.

According to a report from the UK news outlet The Week, a group of expert Ukrainian drone pilots called the Aerorozvidka (Aerial Reconnaissance) are reportedly helping to slow down Russian advances. The Aerorozvidka project is an example of what some might call a war startup.

Founded in May 2014 by Natan Chazin, a Ukrainian battalion commander, and three other men, the Aerorozvidka group has so far grown to a team of over 20 people who comprise a special tactical unit supplied with armored and bulletproof vans. The group currently has 66 drones running on the two most popular software platforms– either NAZA or Pixhawk, developed by 3D Robotics (now maintained by the Linux Foundation).

The drones started out as garage-built drones that were later “chopped up and reconfigured” for intelligence gathering missions. In addition to the drones, the Aerorozvidka group has also produced its own missiles. So far, the group has used these drones to destroy three Russian tanks.

Unlike expensive drones used by the Russian military, the group uses relatively inexpensive and effective devices, Turkish-made TB2 unmanned aerial vehicles, to carry out airstrikes on tanks, supply trucks, and other targets.

The Starlink satellites help to keep drones connected with their bases. The Aerorozvidka unit operates its drones through the Starlink network. The group uses Aerorozvidka drones to provide intelligence and also attack Russian drones and target Russian tanks with the help of the newly available Starlink system that improves internet and connection speeds. 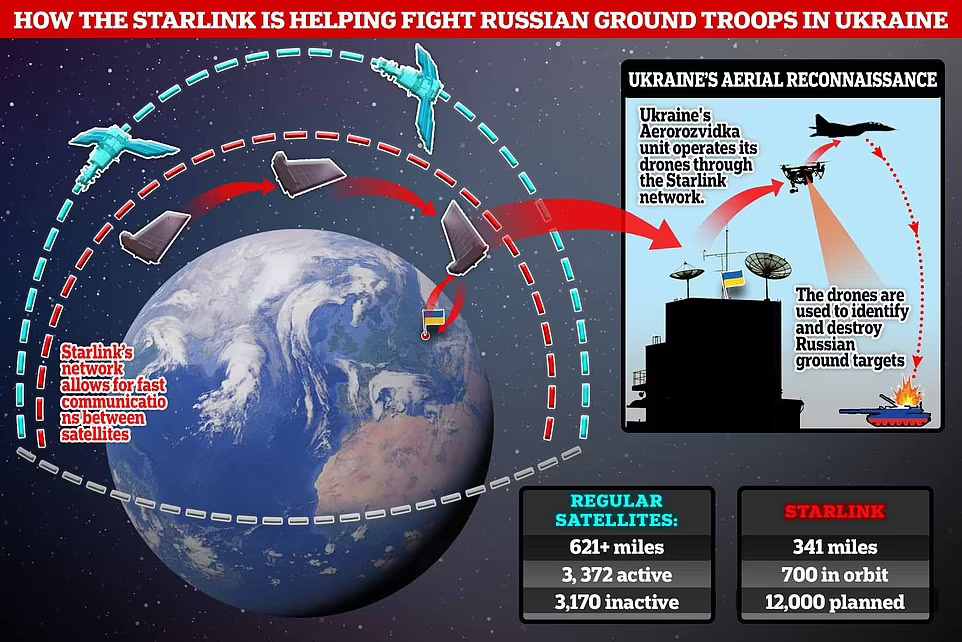 “Russian forces are static when night falls,” a member of the group told the Times, another UK publication. “Their fear of Ukrainian shelling [is] forcing them to hide their tanks in villages between houses, knowing that conventional artillery cannot risk hitting civilians.”

One Ukrainian drone pilot also told the Times that the drones are impossible to see at night and can get close to targets without causing collateral damage. 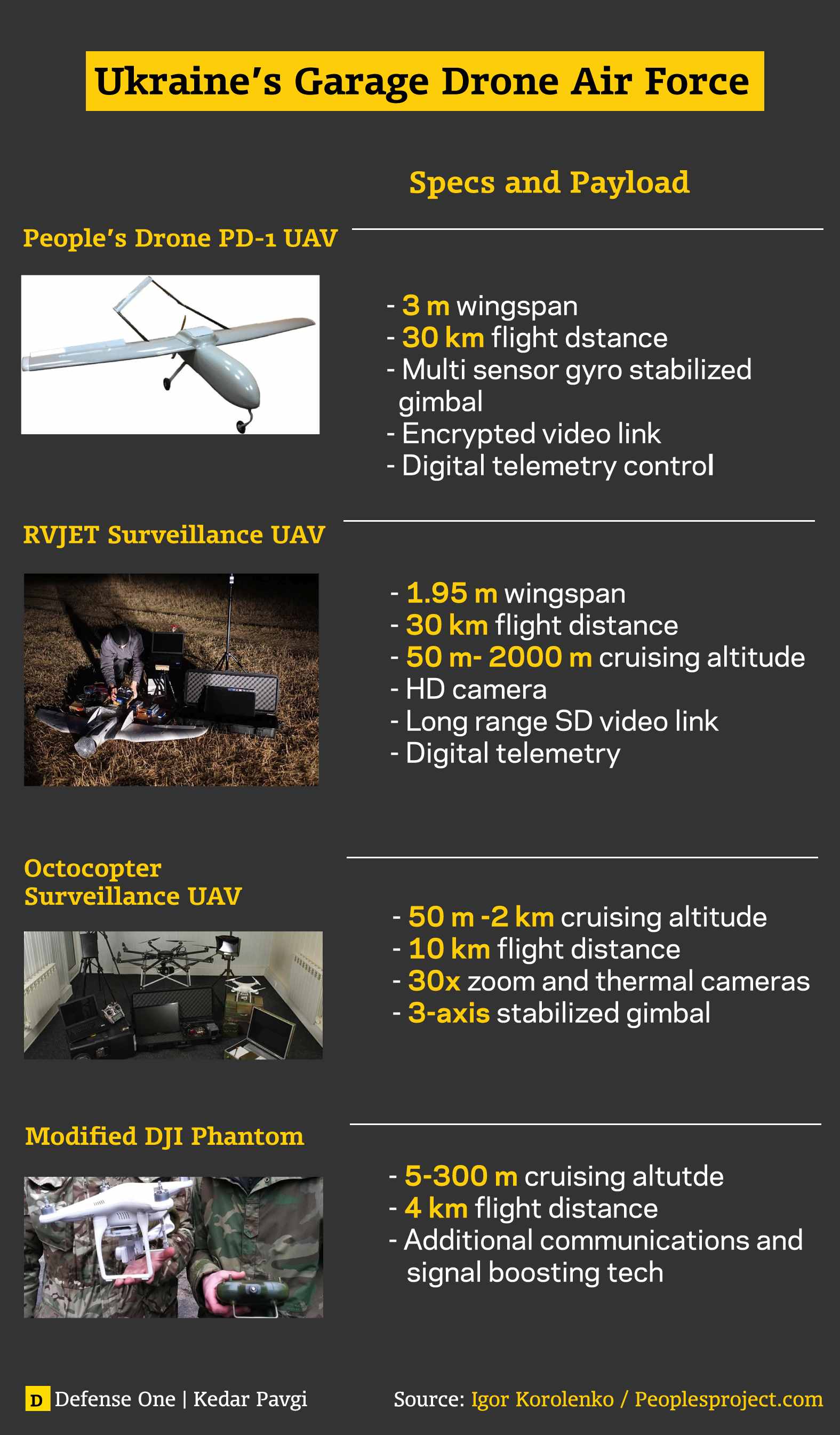 “For the drone warriors of Ukraine, keeping UAVs in the air is a growing challenge. The Russian-backed militias have access to the latest and most sophisticated in signal jamming and GPS spoofing technology from suppliers like the Moscow-based Radio-Electronic Technologies Corporation, or KRET, and expensive, truck-based anti-aircraft systems like the Krasuha 2.

The most sophisticated UAV that has come out of the Ukrainian side since the start of the conflict is called the PD-1 from developer Igor Korolenko. It has a wingspan of nearly 10 feet, a five-hour flight time, carries electro-optical and infrared sensors as well as a video camera that broadcasts on a 128 bit encrypted channel. Its most important feature is the autopilot software that allows the drone to return home in the event that the global positioning system link is jammed or lost.

“Russian military sometimes track locations of ground control stations,” he wrote Defense One in an email. “Therefore UAV squads have to follow certain security measures – to relocate frequently, to move out antennas and work from shelter, etc. As far as I know, two members of UAV squads were killed from mortar attacks after [their] positions were tracked by Russian electronic warfare equipment.”

Korolenko has either designed or modified several UAVs to help with the war effort. He’s part of a volunteer group called the People’s Project, a kind of tech incubation lab based primarily in Kiev. With its slick website and project-based focus, it shares a lot in common with your average Silicon Valley start up but instead of producing e commerce apps, they’re building to equipment to get to the front as quickly as possible. He describes the business model as “sort of wartime crowdfunding,” Kickstarter for conflict.” 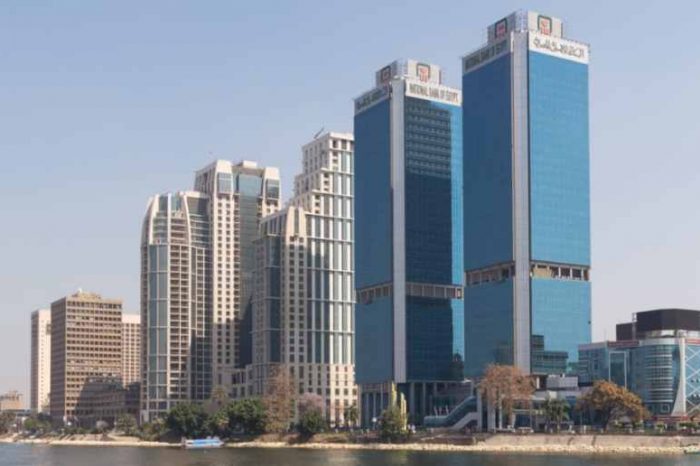 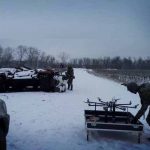