With non-fungible token (NFT) mania sweeping across the Internet, new startups are answering the challenge to meet the growing demands for specialty NFT marketplaces. Even GameStop, the video game chain with brick-and-mortar game stores, wants a piece of the action. As we reported last month, GameStop said it’s launching its own NFT platform on Ethereum to “change the game,” the company said on its website.

However, there is room for everyone, especially for fans to promote their favorite brands. This brings us to Chronicle, a next-generation NFT platform that prioritizes ease of use, allowing anyone to buy, sell, and trade collections from leading brands. Tim Glover, the creator of fan experiences for Jurassic World (2015) and Jurassic World: Fallen Kingdom (2018) co-founded Chronicle together with experienced blockchain investor and innovator Jim Jin, an early seed investor to the popular Thorchain network.

Chronicle said the funding proceeds will be used to accelerate the development of the platform, build the in-house studio and grow the company’s business globally with strategic footprints in Los Angeles, Australia, Singapore, and Beijing.

Chronicle is introducing an easy-to-use marketplace to maximize the availability of unique, authenticated, digital collectibles from the world’s leading entertainment and sports brands for fan communities worldwide. Within Chronicle, each user will be able to buy, sell, trade, bid, and gift collectibles to grow their personal wallet.

“With Chronicle, we’re building a platform for fans of beloved franchises and brands – user-friendly and easy onboarding without having to understand how blockchain works,” explains Mr. Glover. “We are building something that we know works for entertainment brands and their fans, ultimately making digital collectibles available to millions of fans worldwide.”

Chronicle is also building an in-house studio with top artists from around the world to develop and design the collectibles that will be available within its platform. The team already boasts talent from across the entertainment and business world – including creative directors Jack Anthony Ewins (UK) and Manuel Bejarano (Spain) who worked on the Jurassic World digital fan campaigns with Universal Pictures.

Chronicle has been designed and built so that no previous blockchain knowledge is required to transact on the platform. Users will onboard via a simple email registration process and transact with the collectibles in USD.

Whilst Chronicle is set to be blockchain agnostic, the company has made an important decision to only utilize blockchain networks that are environmentally aware and not driven on high-energy “Proof of Work” systems. 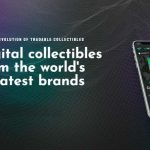