As we reported two weeks ago, Goldman Sachs officially launched a new cryptocurrency trading desk. As part of the initial launch, the Wall Street giant also said it had successfully executed Bitcoin NDFs and BTC future trades on the CME on a principal basis, with all cash settling.

Goldman also said that it’s selectively onboarding new liquidity providers to help expand the firm’s offering. The announcement came two months after the Wall Street giant Goldman Sachs said it would start offering bitcoin, crypto, and other digital assets to its wealthy customers in the second quarter of 2020.

On Friday, Goldman Sachs released a 40-page comprehensive report titled, “Crypto: A New Asset Class?” Earlier today, ZeroHedge shared some excerpts from the report. The full report, which is available to ZeroHedge pro subscribers, can be found here. The report will soon be available to the selected audience any days from now. The well-balanced report includes charts and interviews with crypto bull Mike Novogratz, as well as “anti” bitcoin Nouriel Roubini.

What’s really noteworthy about the report is Goldman’s reference and views about Ethereum. In the report, Mike Novogratz said the following:

“The three biggest moves in the crypto ecosystem—payments, DeFi, and NFTs—are mostly being built on Ethereum, so it’s going to get priced like a network. The more people that use it, the more stuff that gets built on it, and the higher the price will ultimately go.”

Below are some additional details, according to excerpts from ZeroHedge.

“The term “cryptocurrencies”—which most people take to mean that crypto assets act as a digital medium of exchange, like fiat currency—is fundamentally misleading when it comes to assessing the value of these assets. Indeed, the blockchain that underlies bitcoin was not designed to replace a fiat currency—it is a trusted peer-to-peer payments network. As a cryptographic algorithm generates the proof that the payment was correctly executed, no third party is needed to verify the transaction. The blockchain and its native coin were therefore designed to replace the banking system and others like insurance that require a trusted intermediary today, not the Dollar. In that sense, the blockchain is differentiated from other “digital” transactional mechanisms such as PayPal, which is dependent upon the banking system to prevent fraud like double-spending.

In order to be trustworthy, the system needed to create an asset that had no liabilities or contingent claims, which can only be a real asset just like a commodity. And to achieve that, blockchain technologies used scarcity in natural resources—oil, gas, coal, uranium and hydro—through ever-increasing computational-power consumption to “mine” a bit version of a natural resource.

That said, because the network is decentralized and anonymous, legal challenges facing future growth for crypto assets loom large. Coins trying to displace the Dollar run headlong into anti-money laundering laws (AML), as exemplified by the recent ransoms demanded in bitcoin from the Colonial Pipeline operator and the Irish Health service. Regulators can impede the use of crypto assets as a substitute for the Dollar or other currencies simply by making them non-convertible. An asset only has value if it can either be used or sold. And Chinese and Indian authorities have already challenged crypto uses in payments.

As a result, the market share of coins used for other purposes beyond currencies like “smart contracts” and “information tokens” will likely continue to rise. However, even these non-currency uses will need to be recognized by courts of law to be accepted in commercial transactions—a question we leave to the lawyers.

The network creates the value, unlike other commodities

Unlike other commodities, coins derive their entire value from the network. A bitcoin has no value outside of its network as it is native to the Bitcoin blockchain. The value of oil is also largely derived from the transportation network that it fuels, but at least oil can be burned to create heat outside of this network. At the other extreme, gold doesn’t require a network at all.

Derived demand leaves the holder of the commodity exposed to the risk of the network becoming obsolete—a lesson that holders of oil reserves are now learning with decarbonization accelerating the decline of the transportation network, and, in turn damaging oil demand. Likewise, bitcoin owners face accelerated network decay risk from a competing network, backed by a new cryptocurrency.

As the demand for gold is not dependent on a network, it will ultimately outlive oil and bitcoin—gold entropy lies at the unit, not the network, level. Indeed, most stores of value that are used as defensive assets—like gold, diamonds and collectibles—don’t have derived demand and therefore only face unit-level entropy risk. This is what makes them defensive. The world can fall apart around them and they preserve their value. And while they don’t have derived demand, they do have other uses that establish their value, i.e. gold is used for jewelry and as a store of value.

Crypto doesn’t trade like gold and nor should it. Using any standard valuation method, transactions or expected transactions on the network are the key determinant of network value. The more transactions the blockchain can verify, the greater the network value. Transaction volumes and the demand for commodified information are roughly correlated with the business cycle; thus, crypto assets should trade as pro-cyclical risk-on assets as they have for the past decade. Gold and bitcoin are therefore not competing assets as is commonly misunderstood, and can instead co-exist. Because the value of the network and hence the coin is derived from the volume of transactions, hoarding coins as stores of value reduces the coins available for transactions, which reduces the value of the network. Because gold doesn’t have this property, it is the only commodity that institutional investors hold in physical inventory. Nearly all other commodities are held in paper inventory in the form of futures to avoid disrupting the network. This suggests that, like oil, crypto investments will need to be held in the form of futures contracts, not physically, if they are to serve as stores of value.

Crypto assets aren’t digital oil, either, as they are not non-durable consumables and can therefore be used again. This durability makes them a store of value, provided this demand doesn’t disrupt network flows. The crypto assets that have the greatest utility are also likely to be the dominant stores of value—the high utility reduces the carry costs.” 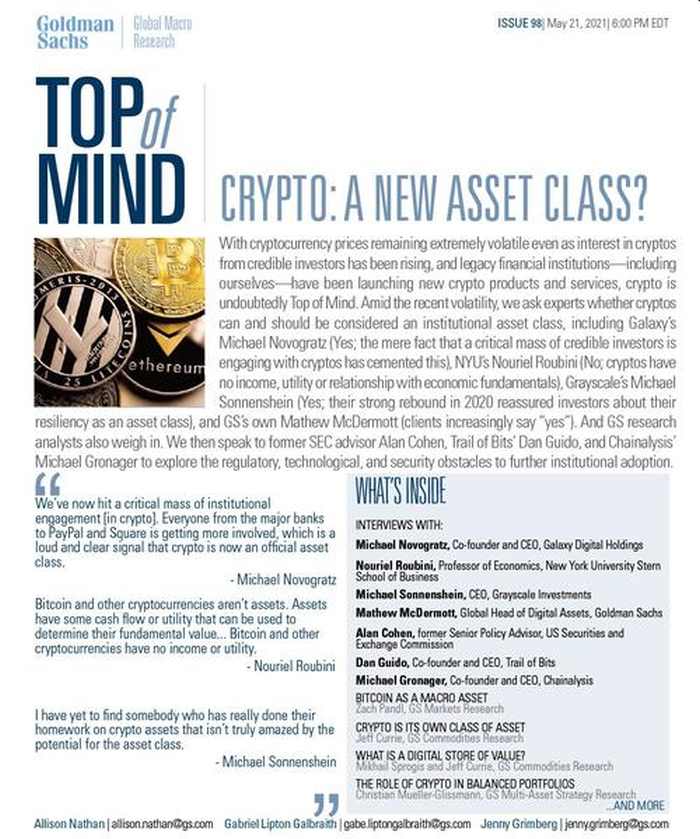 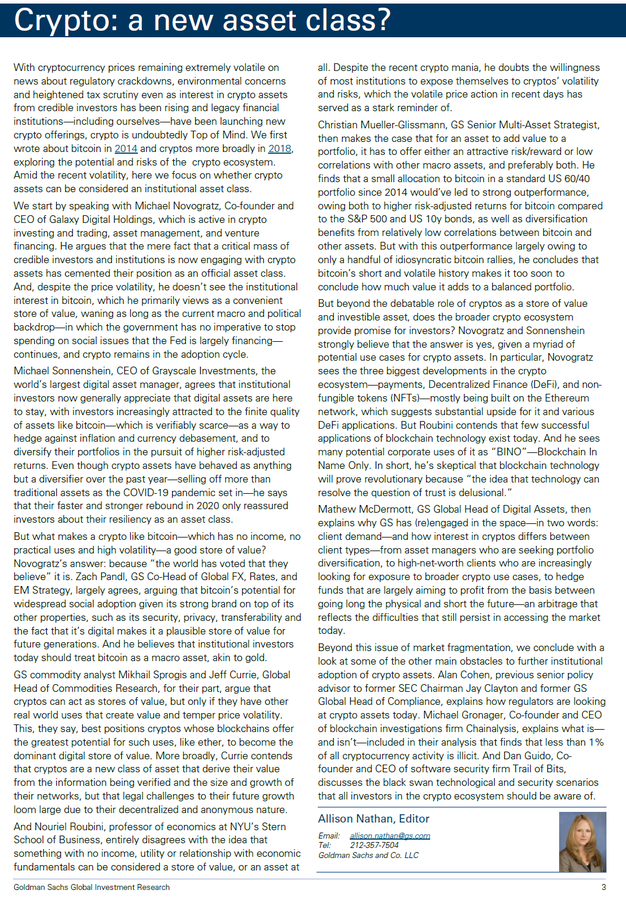 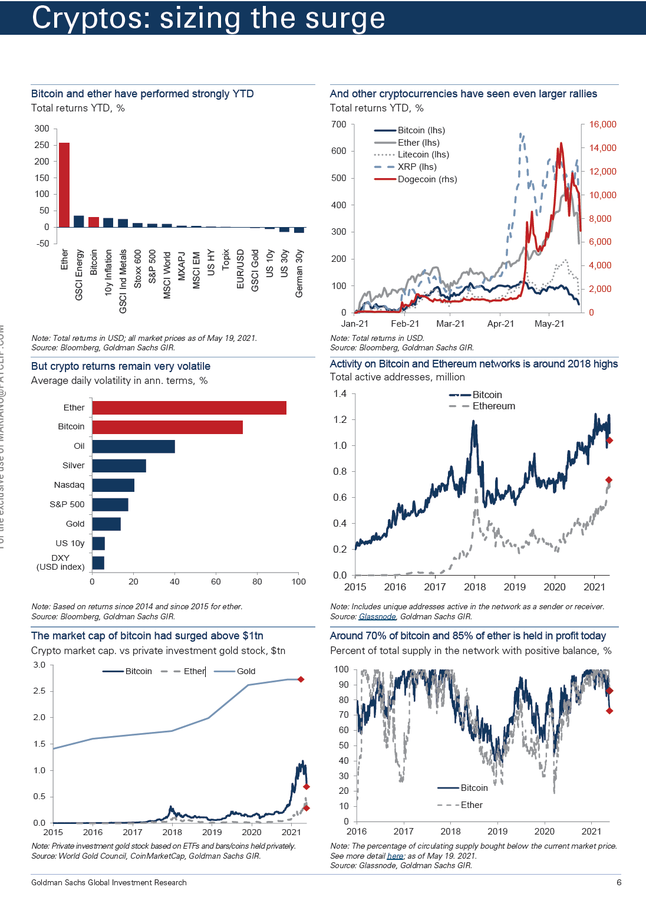 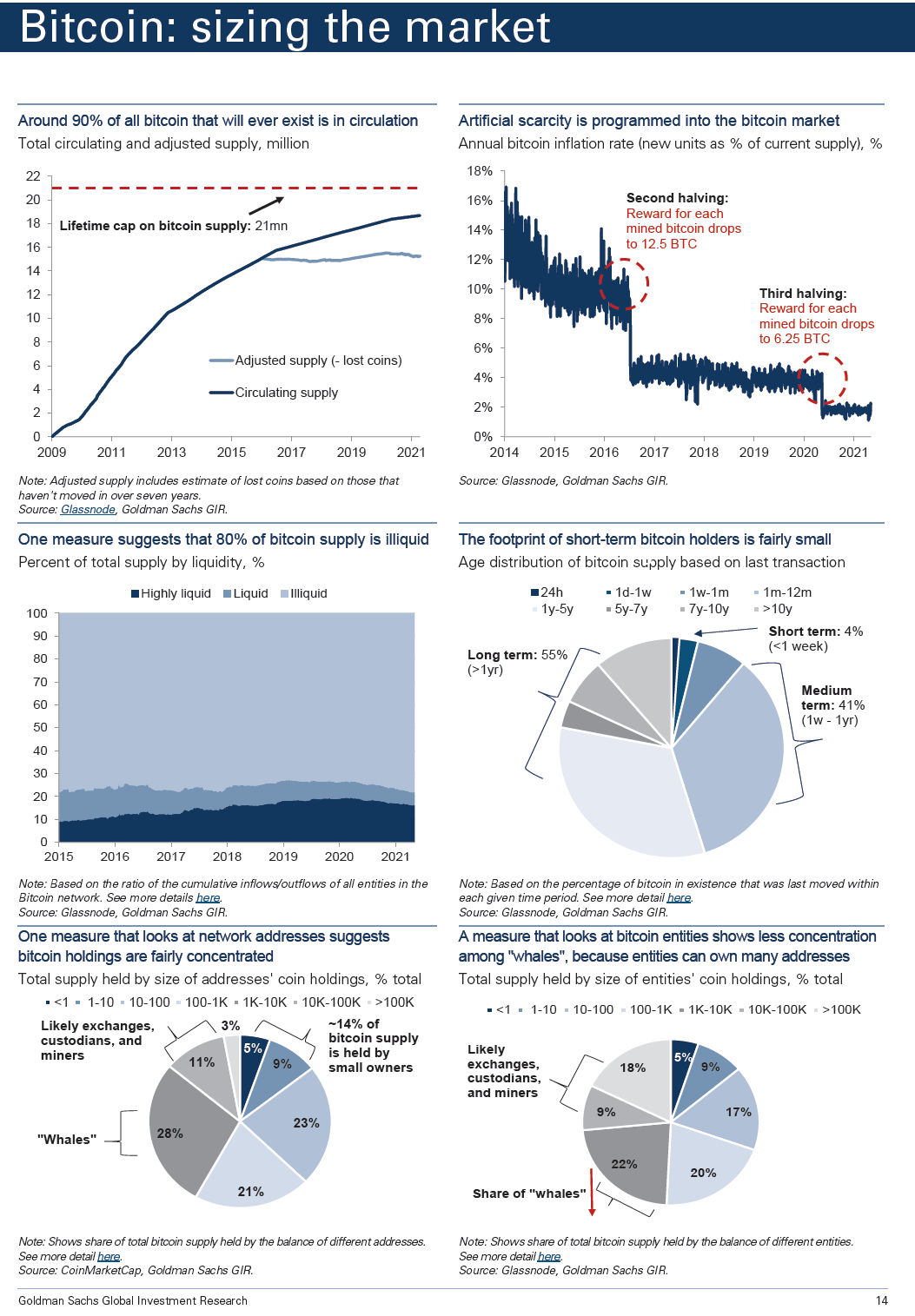 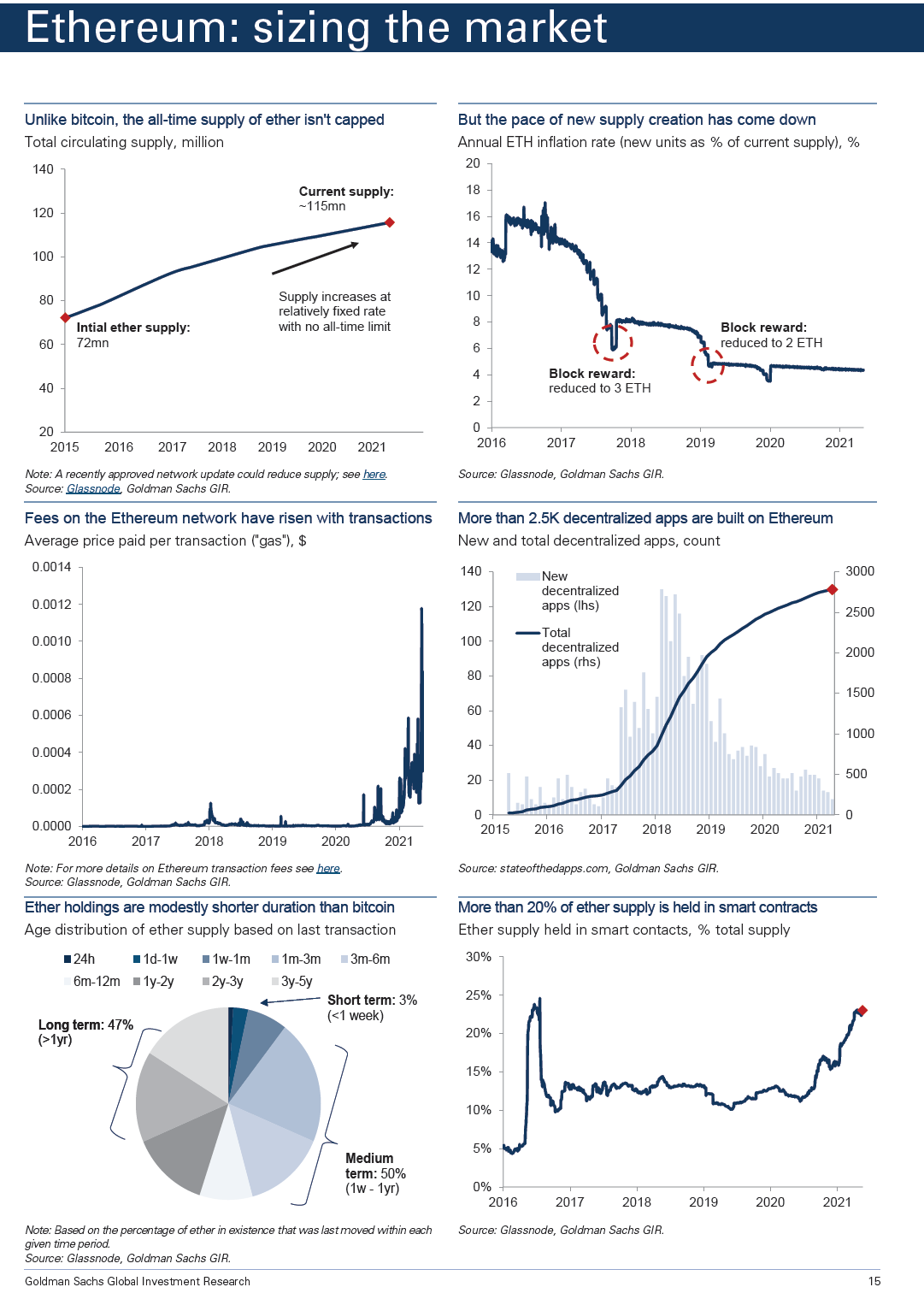 I am pleased to announce the formation of the firm’s cryptocurrency trading team, which will be our centralized desk for managing cryptocurrency risk for our clients. The Crypto trading team will be a part of Global Currencies and Emerging Markets (GCEM), reporting to me, within the firm’s Digital Assets effort led by Mathew McDermott.

As part of our initial launch, we have successfully executed Bitcoin (BTC) NDFs and CME BTC future trades on a principal basis, all cash settling. Looking ahead, as we continue to broaden our market presence, albeit in a measured way, we are selectively onboarding new liquidity providers to help us in expanding our offering.

In addition, yesterday we launched our Digital Assets dashboard which provides daily and intraday cryptocurrency market data and news to our clients. We invite you to highlight the dashboard to your clients. For more information on trade approval and onboarding, contact the Digital Assets team.

Please note, the firm is not in a position to trade bitcoin, or any cryptocurrency (including Ethereum) on a physical basis. 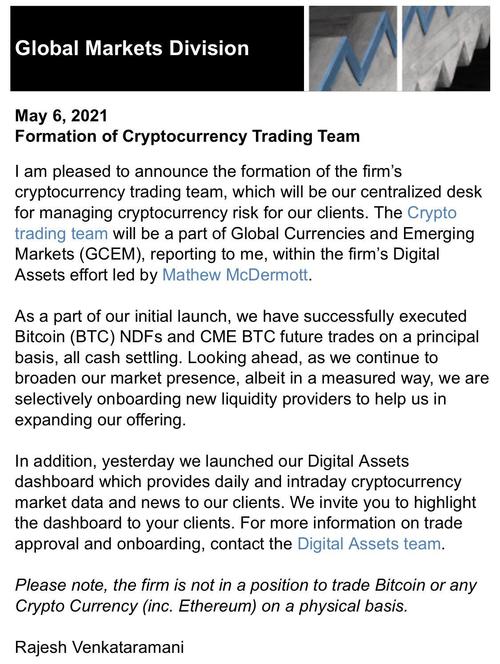 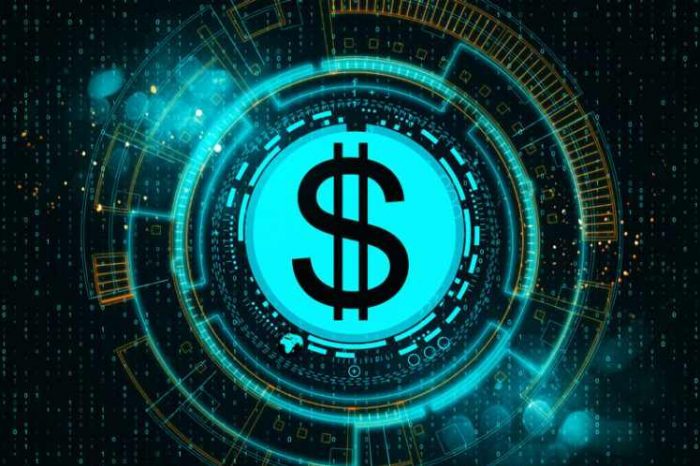