Two Robbers, a Philadelphia-based Hard Seltzer tech startup, “robs” $6M in Series A funding to change the way you drink

Two Robbers is a Philadelphia, PA-based startup and a leading independent hard seltzer brand in the Northeast and Mid-Atlantic founded created by twin brothers Vikram and Vivek Nayar in the heart of Philadelphia. The two brothers want you to ditch beer or cider for their new hard seltzer and change the way we all drink.

By the way, for some of you who may not be familiar with hard seltzer, it is a type of drink that contains carbonated water, alcohol, and often fruit flavoring. Unlike beer, hard seltzer is low in sugar and has fewer calories and about half the carbs of beer. Hard seltzer is also less likely to lead to killer hangovers.

In 2017, the twin brothers set out to create a drink that had a crisp, delicious taste with honest ingredients, no sugar, and no sweeteners. But after months of development, their home was broken into and robbed twice within a few weeks – no joke. Bolt lock blew apart. Cops said it was a professional job. They were *this* close to closing shop but instead doubled down. A year later, they finally launched Two Robbers.

Fast forward four years later, Two Robbers has grown to become one of the leading independent hard seltzer brands in the country.

Today, Two Robbers Hard Seltzer announced that it has closed a $6 million Series A funding round led by Brand Foundry Ventures, a consumer-focused investment fund, and a group of individual investors, including Nelson Peltz.

The Series A funding builds on an exciting year for Two Robbers. Since launching the brand in 2019 across 50 bars, restaurants and retailers in the city of Philadelphia, Two Robbers has seen explosive growth in the Northeast and Mid-Atlantic regions with its products now distributed across 3,000 locations, including major retailers like Whole Foods, Wegmans, Trader Joes, Total Wine and GoPuff.

The Series A financing will help Two Robbers continue to grow its current Northeast and Mid-Atlantic distribution and will support its launch in several new U.S. states, including Massachusetts, Maryland/DC, Virginia, Rhode Island and Michigan. The additional funding will also be used to help enable the company to expand its product line, continue building its team, and support ongoing innovation.

“We launched Two Robbers as a part-beverage company, part-art project, mostly for our friends in Philly. We never imagined it would resonate with so many people. It’s been amazing for us to see how much consumers love the Two Robbers brand and we are excited to expand our reach,” said co-founder Vikram Nayar.

“As an independent beverage company, Two Robbers is not tied to the same playbook as most national seltzer brands,” said Vikram’s twin brother and co-founder Vivek Nayar. “Everything about our approach is unique, from our flavors and formula to our packaging and ability to genuinely connect with the communities we engage with. We believe there will always be a huge amount of people who will prefer that authenticity to mass-produced products.”

Brian Spaly, co-founder and general partner at Brand Foundry Ventures, added, “The beer, wine and spirits industries are rapidly changing, as consumers look for both ‘better-for-you’ alternatives and authentic brands they can call their own. In a short time, Two Robbers has proven that it is well positioned to meet both of those needs. We look forward to helping Vikram and Vivek take Two Robbers to new heights.”

Binance, the world’s largest cryptocurrency exchange, is launching its own NFT marketplace 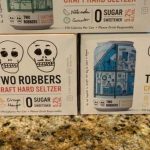 Two Robbers, a Philadelphia-based Hard Seltzer tech startup, “robs” $6M in Series A funding to change the way you drink