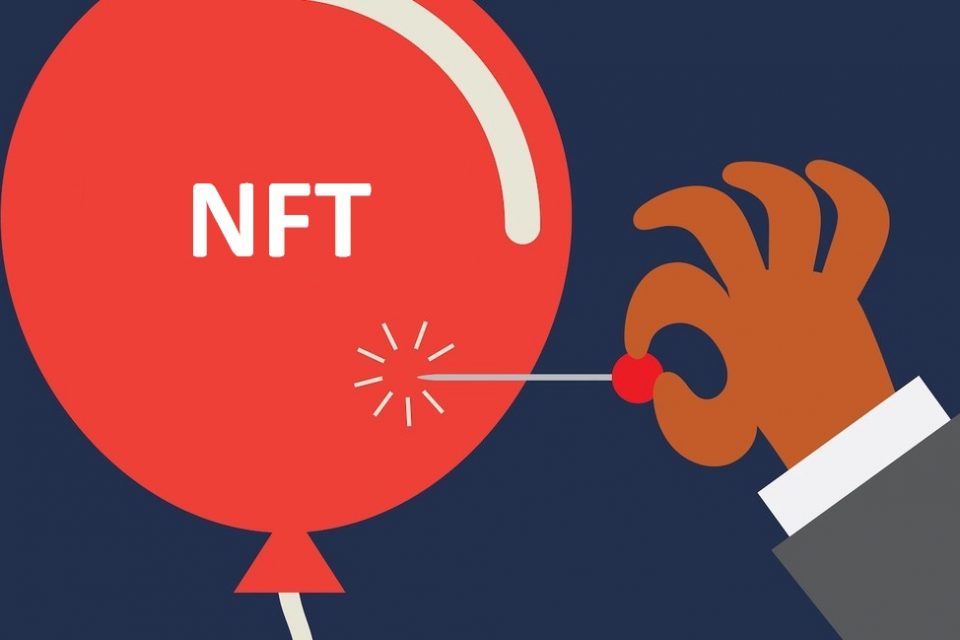 Dr. Albert Einstein, who was considered to be one of the greatest scientists ever lived, once said, “Compound interest is the eighth wonder of the world. He who understands it earns it; he who doesn’t, pays it.” If Einstein were to be alive today, he probably would say that NFT is the eighth tech bubble of the world.

Non-fungible tokens (NFTs) are all the rage. Celebrities, artists, influencers, and NBA stars are riding the NFT hype and cashing in millions of dollars as the crypto-collectibles craze sweep through the art world.

In early March, Elon Musk’s partner Grimes made $5.8 million in just 20 minutes selling digital art as NFT. Then three days later, Twitter founder Jack Dorsey also auctioned off his first tweet as an NFT, which already drew a $2.5 million bid. Then about two weeks ago, Christie’s Auction sold digital artist Beeple’s NFT for a record-setting $69.3 million, making it the most expensive digital art ever sold.

So what exactly are NFTs?

NFT is a type of cryptographic token on a blockchain network that represents a unique digital asset. This asset can either be entirely digital or tokenized versions of real-world assets. Because NFTs are not interchangeable with each other, they may function as proof of authenticity and ownership within the digital realm, for example as proof of the authenticity of rare art.

However, the above explanation of NFT is not good enough. Today, millions of people around the world still have a distorted view of what NFT really is. The best way to understand NFT is to start with the idea of what a token really is.

What is a token?

In a very simple term, a token represents a thing or bits of code. A blockchain token is a digital asset created on a blockchain network as part of a decentralized software protocol and every token belongs to a blockchain address. At the same time, there are also many different types of blockchain tokens, which we will not discuss in this article.

So, why is the concept of token important? Every time someone buys an NFT, they aren’t really buying an artwork itself on the blockchain, but a token (a piece of code) that represents the artwork. This is very important because most descriptions about NFTs are that you are buying artwork — unfortunately you aren’t. Instead, you are buying a token (bits of code on a blockchain network) that points to a URL of a media or an artwork somewhere on the internet.

Unlike digital images with embedded metadata, NFT-based artworks are not embedded with tokens. Instead, the token only references or points to the URL of a piece of media located somewhere else on the internet.

We’ve written over a dozen articles on the subject of NFT and we still don’t fully grasp the concept until yesterday after we came across an eye-opening tweet from Jonty Wareing about NFT is implemented. After careful examination, it seems that the NFT implementation is actually far worse than we originally thought.

It turns out that the implementation of NFT on the blockchain network doesn’t make it as trustless and decentralized as everyone was made to believe. Unlike bitcoin, which is a fully decentralized and based peer-to-peer network, NFT authentication and certification require a third-party company like Rarible or OpenSea. Special thanks to Jonty Wareing for investigating how NFT works behind the scene. Below is what Jonty said:

“The NFT token you bought either points to a URL on the internet, or an IPFS hash. In most circumstances it references an IPFS gateway on the internet run by the startup you bought the NFT from. Oh, and that URL is not the media. That URL is a JSON metadata file”

Oh, and that URL is not the media. That URL is a JSON metadata file

Below is an example of how the NFT artwork sold by Beeple via Nifty was stored. As Jonty further explained, “THAT file refers to the actual media you just “bought”. Which in this case is hosted via a @cloudinary CDN, served by Nifty’s servers again. So if Nifty goes bust, your token is now worthless. It refers to nothing. This can’t be changed. But you said some use IPFS!”

Here's an example. This artwork is by Beeple and sold via Nifty:https://t.co/TlJKH8kAew

The NFT token is for this JSON file hosted directly on Nifty's servers: https://t.co/GQUaCnObvX pic.twitter.com/kMKmZrLTep

THAT file refers to the actual media you just "bought". Which in this case is hosted via a @cloudinary CDN, served by Nifty's servers again.

So if Nifty goes bust, your token is now worthless. It refers to nothing. This can't be changed.

"But you said some use IPFS!"

Jonty is not alone. In an article about vanishing NFTs, the team at VICE gave great insights into why people’s expensive NFTs keep disappearing. As VICE reported, Tom Kuennen, a property manager from Ontario, bought $500 worth of cryptocurrency for a JPEG of an Elon Musk-themed “Moon Ticket” from DarpaLabs back in February. To his surprise, he opened up his digital “wallet” a week later only to find out that his NFT was gone.

Instead, Kuennen was faced with an ominous banner that reads, “This page has gone off-grid. We’ve got a 404 error and explored deep and wide, but we can’t find the page you’re looking for.” His search for the missing artwork led to a bigger revelation about how NFT really works. Below is how VICE explains it:

“When you buy an NFT for potentially as much as an actual house, in most cases you’re not purchasing an artwork or even an image file. Instead, you are buying a little bit of code that references a piece of media located somewhere else on the internet. This is where the problems begin.”

Ed Clements, a community manager for OpenSea, also provided an additional explanation about what happens under the hood when an NFT purchase is made. In an interview with VICE, Clements explained NFT this way:

“Digital artworks themselves are not immutably registered “on the blockchain” when a purchase is made. When you buy an artwork, rather, you’re “minting” a new cryptographic signature that, when decoded, points to an image hosted elsewhere. This could be a regular website, or it might be the InterPlanetary File System, a large peer-to-peer file storage system.”

In other words, if the media being pointed to by an NFT token disappears from the source URL, then all the buyer has left to show is a piece of a token (certificate or signature) that points to a phantom object or an artwork that no longer exists.

Unlike in real life when you buy a wedding ring, for example, you have both the ring certificate and the physical ring. However, in the case of NFT, you only have bits of code living on the Ethereum/blockchain network with missing artwork. Your artwork is MIA.

As VICE further explained, in the case of Kuennen, when he bought that Moon Ticket, “there was no JPEG logged onto the blockchain itself. There was just a certificate, pointing to a URL. And that pointer, Clements explained, can be suppressed for a number of reasons, including a violation of a marketplace’s terms and conditions. Copyright violations and stolen artworks are a feature of the emerging NFT space.”

For Kuennen, the story has a happy ending. He was finally able to get the issue resolved. Just like Kuennen, people still don’t know they’re paying millions of dollars to buy a piece of code or token and not the actual artwork that anyone can easily copy off the internet. In addition, if for any reason, the media or the artwork is moved to another URL, then the NFT toke or code is as good as useless.

Below is a screenshot of the original 404 error page Kuennen received. 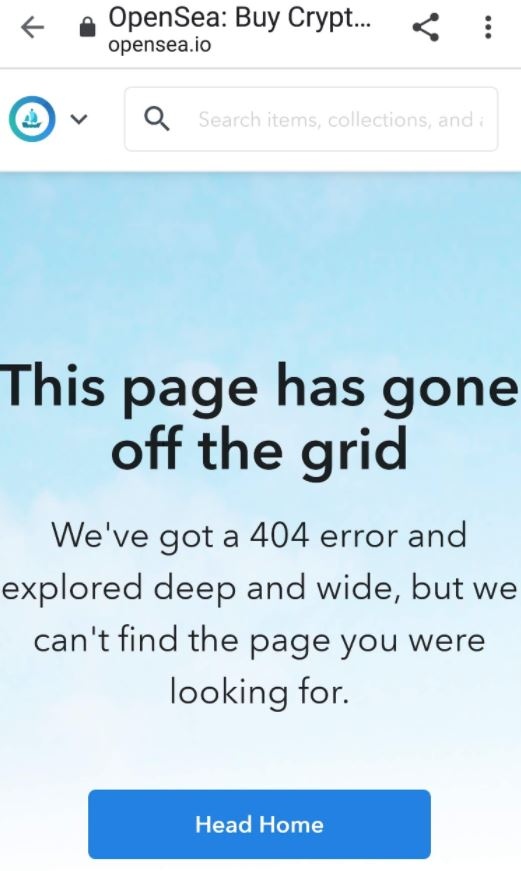 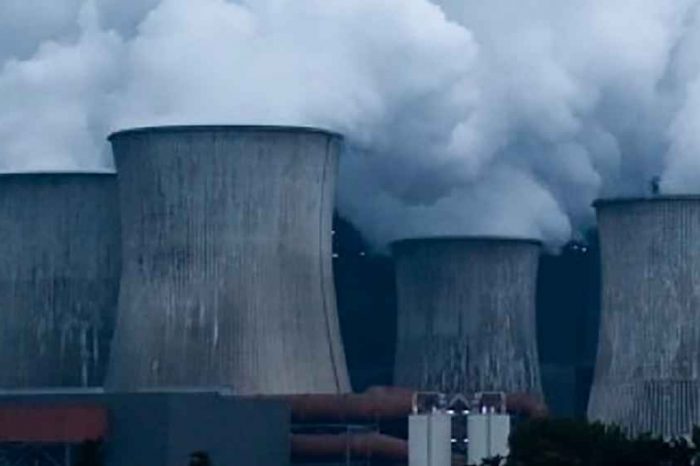 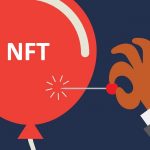