How secure is the U.S. election voting system? Is it vulnerable to hacking? These are a few of the questions many Americans have been asking.

During a CNN live election coverage on November 3, someone noticed something unusual in the live tickers of the election result on CNN at about 10:22 PM Eastern Time. The video was recorded on election night.

Below is the breakdown of what happened just within 40 seconds. At the start of the video, the PA total votes are:

At the end of the video the totals on the screen are for PA are:

How do we explain this abnormally? In general, vote count doesn’t get deducted from one candidate and be given to another candidate. This looks like a classic example of “vote switching.” So, what caused the votes to be deducted? Was the change caused by a glitch in the voting system? Or was the voting system hacked in real-time as major media outlets were reporting the results of the election?

Below is the video. This is a developing story. We plan to reach out to CNN to get the entire video footage. We will keep you posted.

The vote change or vote switching is not unique to the November 3 election. In the video below, cybersecurity expert Todd Wood revealed the mechanics behind vote switching and how electronic vote steal operation worked in the 2018 state of Kentucky governor’s election.

Below is a high-level diagram of the U.S. voting system infrastructure. 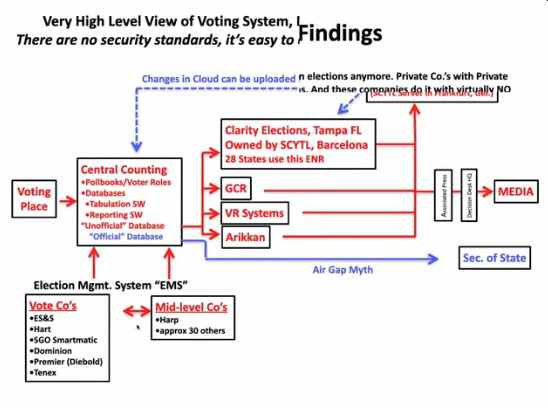