‘Chloroquine is a potent inhibitor of SARS coronavirus infection and spread,’ Dr. Fauci’s led NIH said in 2005. What’s changed since then?

However, before President Trump’s tweet, there were anecdotal evidence that hydroxychloroquine used together with Zinc and azithromycin were used to treat COVID-19 patients. We also told you about several other doctors who credited the malaria drug for saving their patients’ lives. You can read them here. However, many scientists and researchers discredited these claims saying that many randomized clinical studies showed the drug to have the opposite effects. A study published last week even showed hydroxychloroquine to be linked to an increased rate of mortality.

Then last week, President Trump opened the floodgates on the use of hydroxychloroquine after he announced that he has been using the malaria drug as a prophylactic to prevent coronavirus infection. Immediately after his announcement, the medical journal Lancet also published a study of nearly 15,000 COVID-19 patients. Lancet found those being treated with the antimalarial drugs hydroxychloroquine and chloroquine are at a higher risk of death and irregular heart rhythms than those not receiving it.

While countries like Turkey and Brazil claim success treating COVID-19 with hydroxychloroquine, the World Health Organization (WHO) and the US Centers for Disease Control and Prevention (CDC) continue to warn that the malaria drug could cause severe heart problems or death.

This week, WHO went as far as halting hydroxychloroquine trial over safety concerns, according to NPR. Today, Dr. Anthony Fauci also said there’s no evidence that shows the anti-malaria drug hydroxychloroquine is effective at treating COVID-19. “Clearly the scientific data is really quite evident now about the lack of efficacy for it,” Fauci, the nation’s top infectious disease doctor, said during a CNN interview.

In 2007, the National Institutes of Health (NIH) published a study titled, “The Effect of hydroxychloroquine on the survival of patients with systemic lupus erythematosus: data from LUMINA, a multiethnic US cohort (LUMINA L).” According to NIH’s own conclusion, Hydroxychloroquine, which overall is well tolerated by patients with SLE, has a protective effect on survival which is evident even after taking into consideration the factors associated with treatment decisions. Below is the conclusion of the study, according to NIH.

Hydroxychloroquine, which overall is well tolerated by patients with SLE, has a protective effect on survival which is evident even after taking into consideration the factors associated with treatment decisions. This information is of importance to all clinicians involved in the care of patients with SLE.

So what’s the point of all these, you may ask? Hydroxychloroquine is an old drug first introduced in 1955. The drug was in mass use to treat malarial. During World War II, scientists later discovered it could be used to treat inflammatory arthritis and lupus. Today, millions of people around the world, especially millions of people living in Sub-Saharan Africa, are still taking hydroxychloroquine and chloroquine drug to treat malaria. Even SpaceX CEO Elon Musk credited the sister chloroquine for saving his life. Elon Musk said:

‘Yes, I received chloroquine via central line through my chest & both arms. Had near fatal case of falciparum. Would’ve died for sure if not for chloroquine. Doesn’t mean it works for C19, but maybe better than nothing.’

According to NIH own study conducted in 2005 titled, “Chloroquine is a potent inhibitor of SARS coronavirus infection and spread,” chloroquine, a sister drug to hydroxychloroquine, was found to be “effective in preventing the spread of SARS CoV in cell culture.” At the time, there was no mention that chloroquine caused deaths among the SARS CoV patients. So, we still have some open questions that still remain unanswered is, What’s changed since 2005? Is NIH study 2005 still valid? What about thousands of lupus and arthritis patients still taking hydroxychloroquine? Are they at risk? What about millions of people in Sub-Saharan Africa taking taking drug for malaria prevention? And what about people in Brazil still taking the drug?

In the meantime, below is the the abstract of NIH study on chloroquine as a potent inhibitor of SARS coronavirus infection and spread.

We report, however, that chloroquine has strong antiviral effects on SARS-CoV infection of primate cells. These inhibitory effects are observed when the cells are treated with the drug either before or after exposure to the virus, suggesting both prophylactic and therapeutic advantage. In addition to the well-known functions of chloroquine such as elevations of endosomal pH, the drug appears to interfere with terminal glycosylation of the cellular receptor, angiotensin-converting enzyme 2. This may negatively influence the virus-receptor binding and abrogate the infection, with further ramifications by the elevation of vesicular pH, resulting in the inhibition of infection and spread of SARS CoV at clinically admissible concentrations.

Chloroquine is effective in preventing the spread of SARS CoV in cell culture. Favorable inhibition of virus spread was observed when the cells were either treated with chloroquine prior to or after SARS CoV infection. In addition, the indirect immunofluorescence assay described herein represents a simple and rapid method for screening SARS-CoV antiviral compounds.tion.

You can read the detailed study at NIH website. 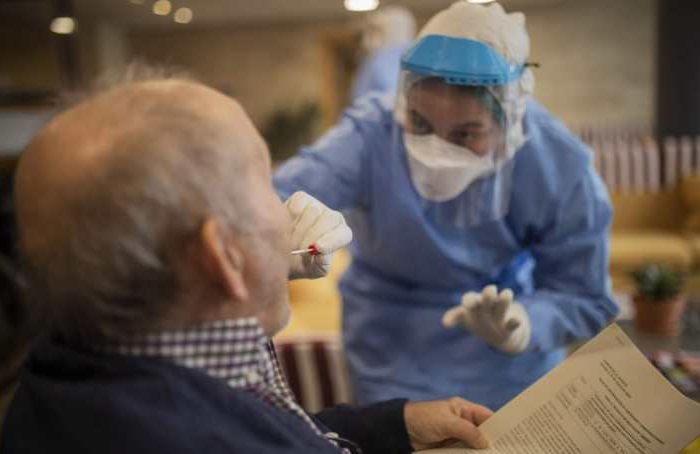 The Most Important Coronavirus Statistic: 43% Of U.S. Deaths Are From Nursing Homes & Assisted Living Facilities (0.6% Of The Population)

‘Chloroquine is a potent inhibitor of SARS coronavirus infection and spread,’ Dr. Fauci’s led NIH said in 2005. What’s changed since then?