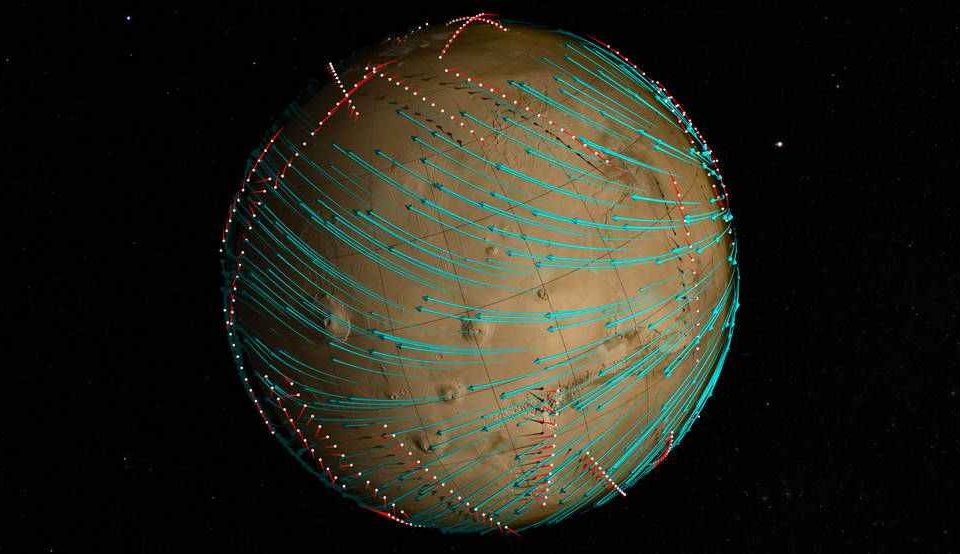 NASA researchers made the first-ever map of wind circulation in the upper atmosphere of Mars. With data from NASA’s Mars-orbiting MAVEN mission, this new map helps scientists to better understand the workings of the Martian climate. Mars Atmosphere and Volatile Evolution (MAVEN) is a spacecraft developed by NASA that went into orbit around Mars to study the planet’s atmosphere.

According to the latest announcement from NASA, “Researchers have created the first map of wind circulation in the upper atmosphere of a planet besides Earth, using data from NASA’s MAVEN spacecraft that were collected during the last two years. The new map of Mars winds helps scientists to better understand the workings of the Martian climate, giving them a more accurate picture of its ancient past and its ongoing evolution.”

MAVEN is the first spacecraft specifically designed to study the Mars upper atmosphere, in order to better understand the evolution of its climate. By measuring windspeed and direction near the top of the atmosphere, MAVEN has discovered that high-altitude wind currents are being disturbed by terrain features far below. This unexpected and surprising finding means that MAVEN can sense the presence of mountains and valleys on the surface of Mars while skimming the edge of space.

MAVEN, the Mars Atmosphere and Volatile EvolutioN mission, recently celebrated the five-year anniversary of its entrance into orbit around Mars on September 21. The primary scientific goal of the mission is to study what is left of Mars’ atmosphere to determine how, in the distant past, an ocean-covered and potentially habitable Mars became the dry and desolate place it is today. Studying the present Martian atmosphere — the rate at which it is being lost to space and how and why it is being stripped away — gives us clues with which we can piece together the puzzle of understanding planetary atmospheres, including our own.

“The observed global circulation provides critical inputs needed to constrain global atmospheric models,” said Mehdi Benna of NASA’s Goddard Space Flight Center in Greenbelt, Maryland, who led one of the two studies that enabled the creation of the revolutionary winds map. “These are the same models that are used to extrapolate the state of the Martian climate into the distant past.” Benna is lead author of a paper on this research published December 12 in Science.

“The winds observed in the Martian upper atmosphere are sometimes similar to what we see in global model simulations, but other times can be quite different,” said Kali Roeten of the University of Michigan, Ann Arbor, Michigan. “These winds can also be highly variable on the timescale of hours, yet in other cases, are consistent throughout the observation period.” Roeten is lead author of the second paper on this research published December 12 in the Journal of Geophysical Research-Planets.

Upper atmospheric winds on Earth have already been mapped in detail. Winds drive a series of processes in the atmosphere that can affect the propagation of radio waves, which are crucial for communications purposes for those on the surface, and the prediction of paths satellites will take in their orbit around Earth. Mapping Martian winds, therefore, is a crucial step towards understanding characteristics of extraterrestrial atmospheres beyond what we know about processes on Earth.

Planetary atmospheres aren’t static, and they certainly aren’t uniform. To categorize where distinctive processes occur, the layers of atmospheres are differentiated based on temperature. For example, humans live in the lowest level: the troposphere. That’s where weather happens, and temperature gets cooler at higher altitudes.

The upper atmospheric winds on both Earth and Mars are in the planets’ respective thermospheres, which are areas where temperature increases with height. The measurements of winds that were recently mapped above Mars were found at an altitude range of about 140-240 kilometers (85-150 miles) above the planet’s surface.

The wind data has been gathered by the Neutral Gas and Ion Mass Spectrometer (NGIMS). NGIMS’ original purpose was to determine the structure and composition of the Martian atmosphere by measuring in it the amounts of ions (electrically charged particles) and gases. However, although it was not originally designed to do so, in April 2016, the MAVEN team began using NGIMS to observe horizontal winds. Pausing normal collection of data, scientists on Earth programmed the instrument to nod back and forth so that it could detect the direction of winds along its track.

By combining data from many tracks as MAVEN orbits Mars, scientists slowly built up a map of wind behavior. This led to a startling discovery: the wind patterns actually correlated with the Martian topography below.

Far above and down below

Mars has tall mountains and steep valleys just as Earth does, and winds on the surface are forced above and around this topography. The disturbance of surface winds leads to echoes of these wind patterns in the Martian thermosphere as gravity waves. 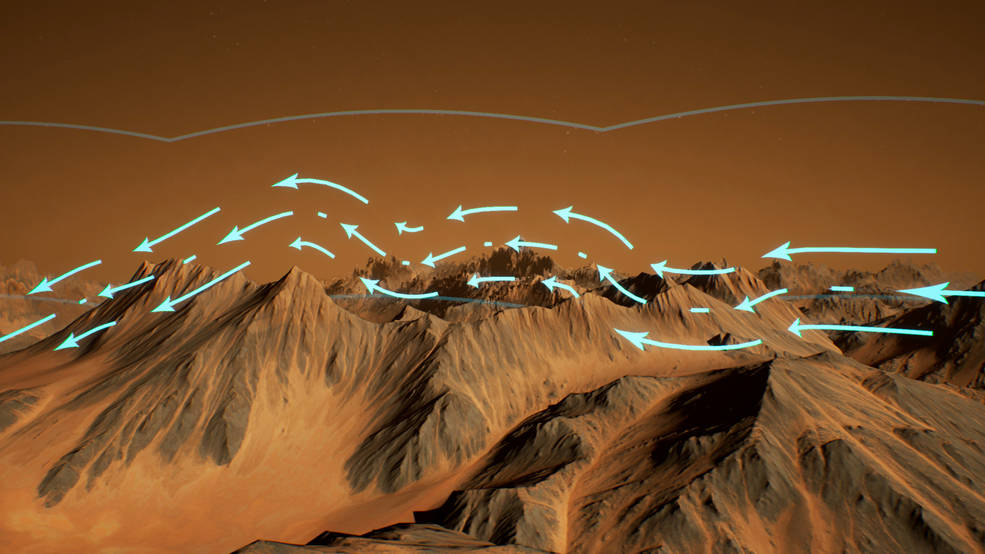 Conceptual image of wind (blue arrows) flowing over rugged Martian terrain and generating disturbances that propagate upward as atmospheric gravity waves (grey lines). By sensing these gravity waves, MAVEN can detect where valleys and mountains are on the surface — even if it’s orbiting at the edge of space.
Credits: NASA Goddard/MAVEN/CI Lab/Jonathan North

Atmospheric gravity waves (not to be confused with extragalactic gravitational waves) are caused by the displacement of air masses from a resting state. Gravity tries to bring the fluid back to equilibrium, and in doing so, creates waves in the disturbed fluid.

As the gravity waves created when wind on Mars is forced around surface topography ripple upwards through the atmosphere, MAVEN can detect where valleys and mountains are on the surface — even if it’s orbiting at the very edge of space.

This discovery was the first detection of topography-induced gravity wave ripples in the thermosphere of any planet, even Earth. The MAVEN team plans to study these gravity waves further during different seasons and in different locations on Mars to improve understanding of not only the specifics of thermospheric winds but also of the very fundamentals of physics itself.

This research was funded by the MAVEN mission. MAVEN’s principal investigator is based at the University of Colorado’s Laboratory for Atmospheric and Space Physics, Boulder, and NASA Goddard manages the MAVEN project. NASA is exploring our Solar System and beyond, uncovering worlds, stars, and cosmic mysteries near and far with our powerful fleet of space and ground-based missions. 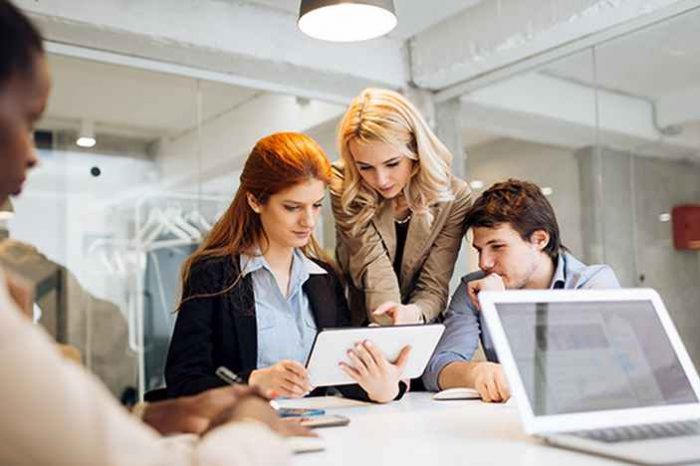 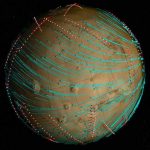