Node.js is an open-source, cross-platform JavaScript run-time environment that executes JavaScript code server-side. Launched 9 years ago, it is a JavaScript runtime environment used by startups and enterprises alike to build enterprise, mobile, web and IoT applications, robotics, and API engines across an array of industries and companies, like Netflix, Airbnb, NASA, PayPal, Walmart, Capital One and more.

Today, the Node.js Foundation, a community-led and industry-backed consortium to advance the development of the Node.js platform, announced the availability of its Node.js User Survey Report. Survey reveals productivity, satisfaction, reduced development cost, and increased application performance increase over time with Node.js. Key findings of the survey reveal the benefits of Node.js expand over time, resulting most often in improved developer productivity and satisfaction and reduced development costs. Containers and cloud native computing are on the rise with 58 % of overall users noting they are using Kubernetes and Docker, which is up from 45 % in our 2016 survey.

Furthermore, nearly three in four users plan to increase their use of Node.js in the next 12 months with growth likely coming from outside the United States, particularly in Latin America or EMEA. More than 1,600 people spanning more than 100+ countries and speaking at least 60 different languages participated in the survey, which was distributed in English and Chinese. Analysis of survey results conducted by third party consultant, ResearchCollaborative.

“The Node.js 2018 User Survey shows consistent Node.js growth and interest in Node.js across regions, particularly in Latin America and EMEA,” said Mark Hinkle, Executive Director of the Node.js Foundation. “One of the most revealing findings in our new Node.js data is increased use of Docker, Kubernetes and GraphQL. For the first time, we also asked who is deploying to serverless frameworks from AWS, Google and Microsoft. A hallmark of Node.js is its versatility and ubiquity, so each year we see new developers and operators around the world leverage the technology in new ways.”

“Developers are key influencers of the direction and pace of technology adoption,” said Rachel Stephens, RedMonk analyst. “The technology industry is experiencing increasingly accelerated change in both tools and approaches. As such, large surveys of developer communities provide notable insight into the technology landscape and its future direction.”

According to the survey, three in four Node.js users are focused primarily on back-end or full stack development. There has been a slight drop in this wave in those who have any focus on back-end development. US/CA respondents are more focused on full stack than back-end.
Ops/DevOps is really only a focus in US/CA – although even here, it is not widely focused on. 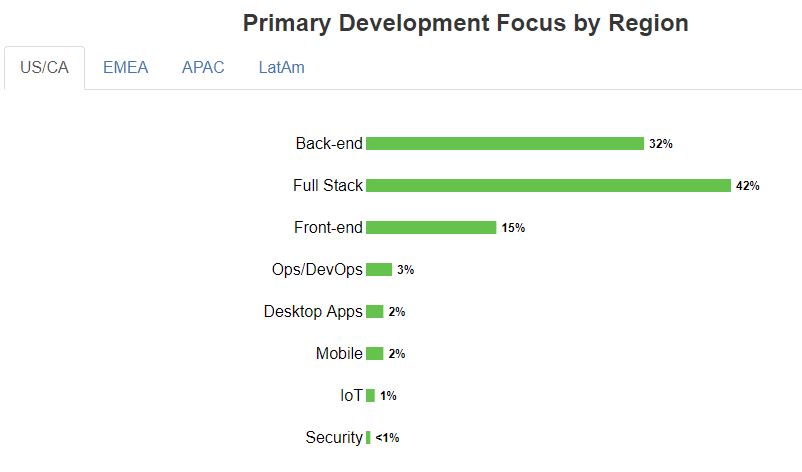 The survey also provides insights into where the codes are deployed. AWS is the primary place where respondents deploy code for production, and it seems to be growing for use in development. On-Premise infrastructure is also widely used, but has dropped for use in production since last year. 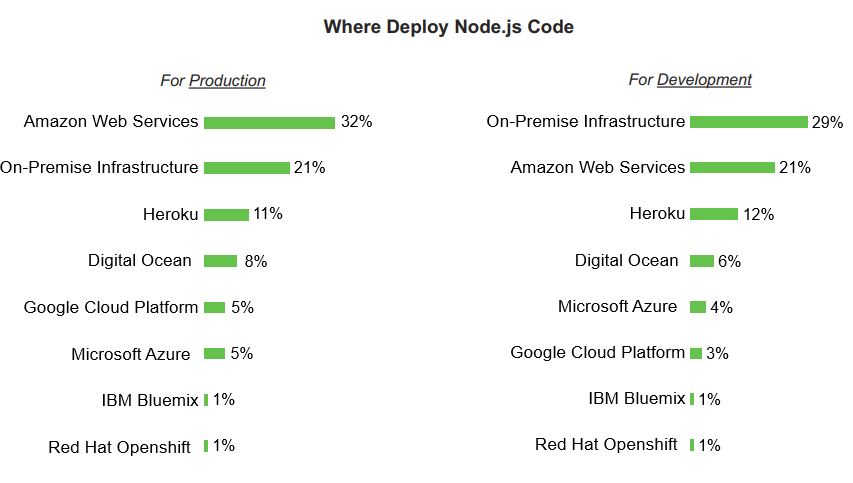 The survey also shed more lights on operational use cases for Node.js. As before, the vast majority of respondents are spending time developing web apps, particularly those in full stack or front end positions. A notable minority also engage in enterprise and/or hobbyist work. Those outside the traditional development areas are more likely to be working on embedded systems 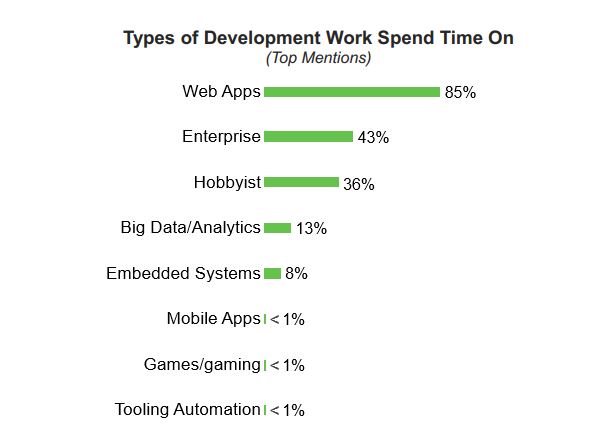 The survey also shows other tools/technologies used in conjunction with Node.js. Respondents are using a range of tools with Node.js including, primarily: databases, libraries and Node.js frameworks. There is considerable variation based on primary development focus – with back-end and full stack developers most likely to use a range of tools. Messaging systems and CI are less commonly used than other tools – and usage has dropped since last year. 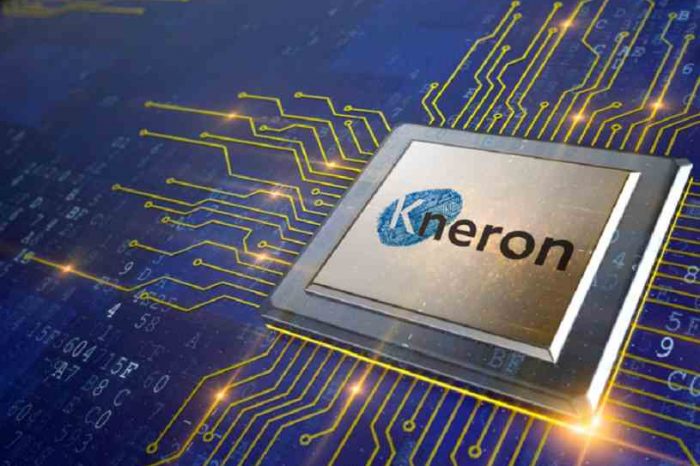