Bitcoin is back! In just 30 minutes, the world’s most popular cryptocurrency surged over 17 percent with a gain over of $1000 to reach $8,000, according to crypto trading site, Coinbase. The sudden rise in Bitcoin brought back traders and fans, who once abandoned the popular cryptocurrency. Bitcoin later lost some of the gains later in the day. Bitcoin still has a long way to go to get to the December 2017 price of $19,000, a gain of 2,000 percent over the previous 12 months. But the Bitcoin has since lost roughly two-thirds of its value given worries about regulatory crackdowns and tax-related selling ahead of the U.S. tax deadline on April 17. The volatility of Bitcoin has been called into question by investors and traders alike. 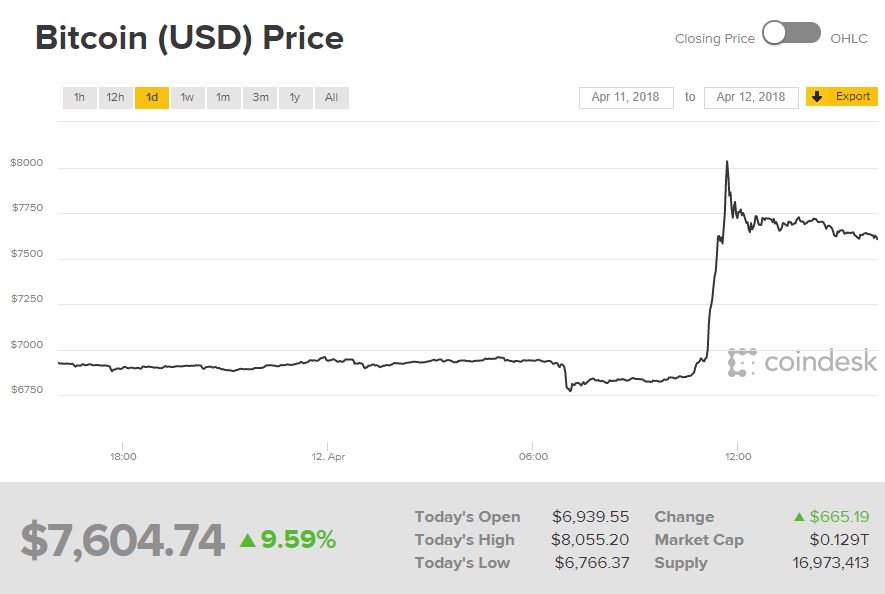 No one knows the reason for the sudden surge. However, there were speculations on Twitter that the jump had to do with the recent news that Bitcoin has been declared compliant with Shariah law – according to a report published online today, April 12 – may have contributed to the spike that reads: “Additional 1.8 billion people will now be able to buy #bitcoin #bitcoin is declared halal and holy for Islamic Community. Expect a bounce as soon as Saudi Arabia, Qatar & Abudhabi Sovereign Funds enters Crypto Markets.”

The research was conducted by microfinance firm based in Indonesia, Blossom Finance. The publication titled: “Is Bitcoin Halal or Haram?,” is a 22-page working paper that concludes that “bitcoin qualifies as Islamic money, except where it is banned by a local government.”

The Free research paper into Shariah permissibility of Bitcoin, cryptocurrency, and blockchain, states that: “Over the past few years since the creation of bitcoin, many people have wondered if cryptocurrencies are compatible with Shariah-compliant finance. Islamic banking has a lot more rules that apply to profit sharing, loss bearing, leasing, safekeeping, and more. For instance, Shariah Law specifically prohibits usury which is called “riba” or collecting interest paid on loans. Bitcoin and cryptocurrencies have come into question over the years concerning whether or not they comply with Islamic banking. Just recently this past December a Muslim cleric declared that owning bitcoin was compatible with Islamic finance. However other clerics have disagreed with this opinion and Egypt’s top Islamic cleric had issued a fatawa (religious edict) against bitcoin.”

You can download a copy of the research paper here.