While Bitcoin has received a lot of attention for the way it allows seamless payments without worry about foreign fees and currency exchange rates, it’s beginning to fall out of favor because of volatility and price fluctuation. At a point in 2017, Bitcoin was almost exchanged at $20,000 for one Bitcoin. Today, Bitcoin is hovering under $7,000. As such, Bitcoin is unlikely to remain the main platform for blockchain payments. Major companies like IBM and Microsoft are looking into using blockchain technology to send payments across borders. However, the solution to blockchain payment is not limited to giant tech companies. Smaller startups like the Liquidity.Network are also exploring an off-chain scaling solution to existing blockchains, providing significant improvements for payments.

Founded by Dr. Arthur Gervais and Rami Khalil, Arthur is an Assistant Professor) at Imperial College London and at the Lucerne University (HSLU). He completed his PhD thesis on the topic of the security, performance, and privacy of proof of work blockchains at ETH Zurich
in 2016. He co-authored 8+ influential peer-reviewed scientific articles published at top-tier security conferences. Arthur holds two Master degrees from KTH Stockholm and Aalto University and a diplôme d’ingénieur from INSA de Lyonfrom 2012.

Liquidity.Network is set to launch a new scalable off-chain payment system which allows Ethereum users to make payments without costly transaction fees. By utilising payment hubs, Liquidity.Network allows multiple users to send cost efficient Ethereum micropayments for the very first time. The Liquidity team will also be launching a mobile-friendly app, which will make it more convenient than ever to carry out blockchain payments in everyday life.

Liquidity.Network is the first ever off-chain payment system to have a working MVP that allows its users bi-directional transfers of Ethereum. The project has already been successfully deployed on Ethereum’s Testnet service and has reached more advanced stages of development in comparison to its competitors, such as Raiden Network.

In a move that is sure to encourage mainstream adoption, Liquidity.Network has no joining fees and is free to use for regular users, with only merchants paying transaction fees. Similarly to Paypal, Liquidity.Network allow those fees to be paid by the sender or the recipient. One game changing use case of Liquidity.Network’s payment hubs technology is the lucrative ‘airdrop’ market, which will now have a go-to low cost provider to send out millions of tokens whilst allowing recipients to forward their tokens to their friends and family free of charge.

Liquidity.Network’s novel technology allows any member of a payment hub to pay any other member of a payment hub, whilst integrating with REVIVE to allow rebalancing of payments off-chain without the need for costly onchain refill transactions. By utilising off-chain payments, the network allows users to transfer their funds instantly with an enhanced level of privacy that is low cost and secured by the blockchain. This ‘trustless Paypal’ will upgrade the Ethereum network, and have far-reaching implications for the blockchain world as usage grows, enabling a higher number of users to use the Ethereum network without adding to congestion.

Liquidity.Network is a proven non-custodial network which uses the same approval properties as proof of work. Liquidity.Network remains on track to incorporate ERC20 tokens into its offering as early as this month, providing over 500 projects which currently exist on Ethereum the opportunity to expand their scalability and user participation is set to increase rapidly.

In an exciting move, Liquidity plans to launch the Liquidity DEX decentralized exchange by Q3 2018 which is set to become the very first non-custodial off-chain blockchain exchange.

A number of VC funds are already backing Liquidity.Network, such as DHVC, zk Capital, ZMT Capital and YouBi Capital. Liquidity.Network has already secured one of the first payment network customers with Hive Power, and the two companies will be collaborating to bring blockchain payment methods to the domestic energy industry.

Having already successfully secured 10,496 Ether in the public presale in March 2018, all eyes are on Liquidity.Network with the launch of its main sale ICO due on the 14th June 2018. Below is a table of Liquidity compares with other existing payment solutions 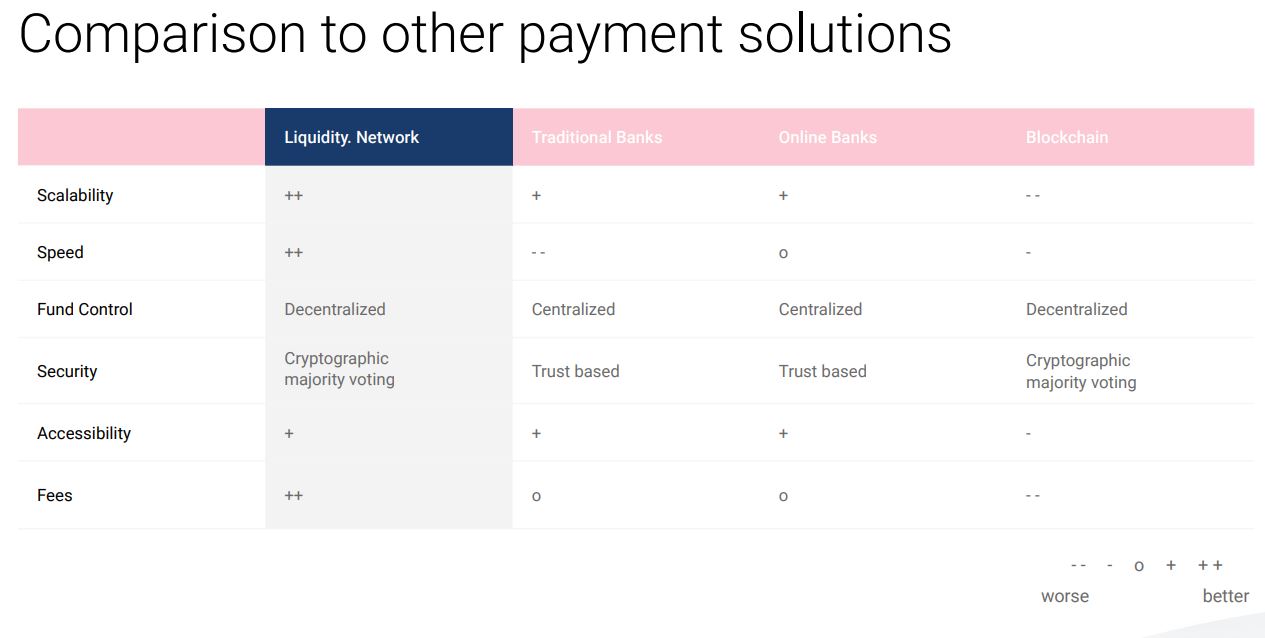 Below is a comparison with other off-chain solutions. 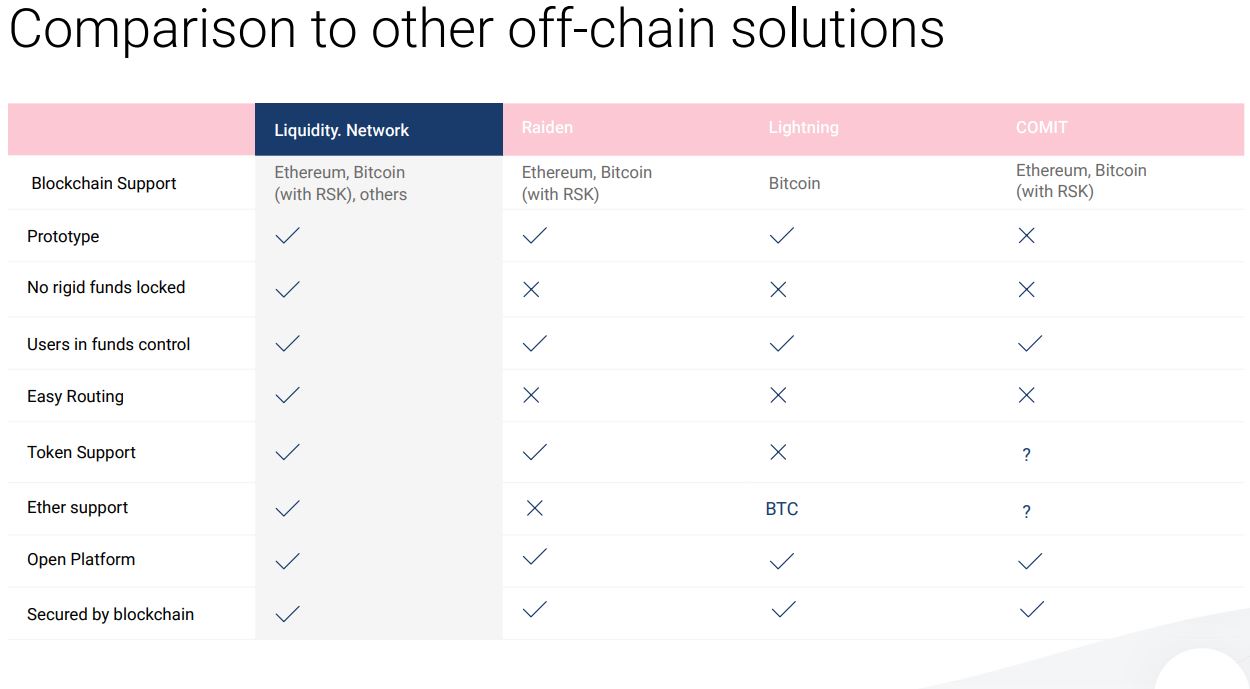 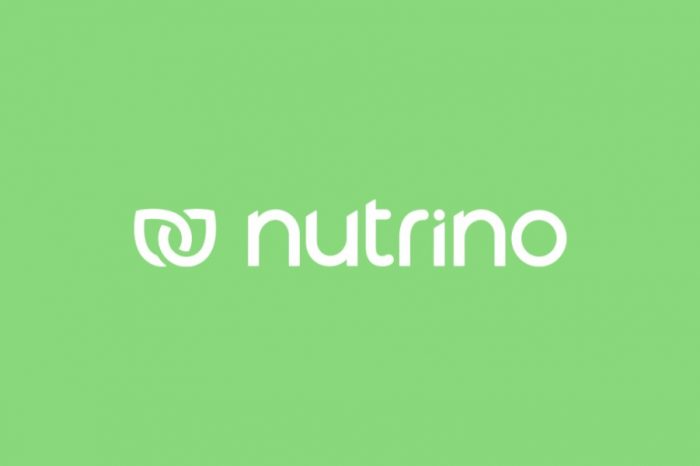